Recap: Nishida is worried Komano is loosing his will to play, but the first round of the playoffs proves his work hasn’t been in vain.

Coming back from last episode’s cliffhanger, we see the real reason for Nishida’s supposedly cold words: he’s actually worried about Komano. It is true that he has always been the weak link of the group, and with Tsukuba rising into his roll as the best new recruit, he could easily fall to the wayside right as he was starting to grow in skill.  I’d definitely debate the merits of someone watching people play being more tiring than the actual effort needed to play competitive karuta, but it was a nice touch by Chihaya to remind everyone just how important his scouting is. 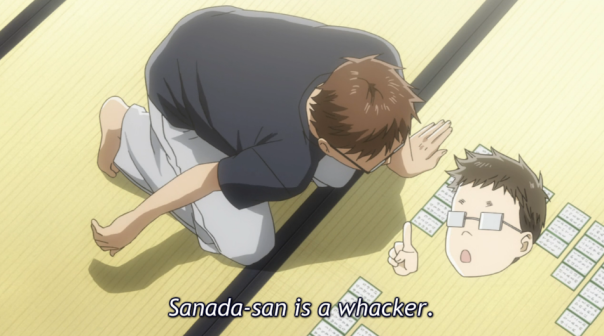 I’m still kinda bummed we didn’t see a whole lot of actual action this week. While there was some karuta to be had, it was all just everyone taking advantage of the information Komano had provided. There was no drama or tension, and that’s really what I love most about this show. At least it was funny, what with Kana’s pouty face and Komano’s disembodied head giving out advice like a karuta genie.

I’m pumped to see how Mizusawa ekes out another victory against this new challenger. It’d be fun to just have Mizusawa roll them to make ’em pay for not taking the team seriously, but with the matches totally equal I imagine this’ll be another skin-of-the-teeth kind of victory. If they win at all, honestly. Still, as much fun as it would be to have them play Hokuo again after, Hokuo is obviously on the fast track to the age old practice of having your old rival lose to show how strong the new threat is in Fujisaki. If Mizusawa doesn’t go on to play them after all the hype that’s been built up I’ll be incredibly surprised.