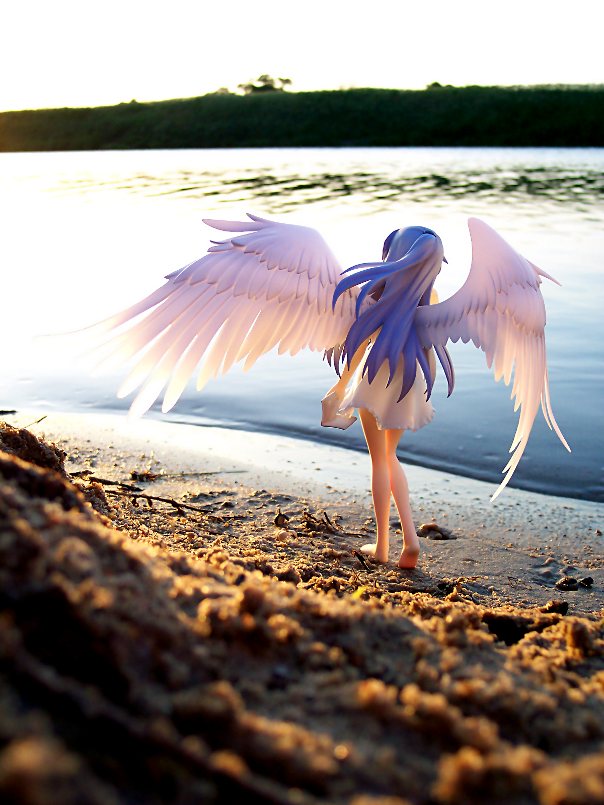 Welcome to another edition of What We Got and What We Thought. Better late then never this month as we find only Gee, Life, and myself with new things to talk about. If taking pictures of Hayane this winter has taught me anything, its that I need more ice themed figures. Thankfully Tony just happens to have another girl that easily fits the bill. Neige and that elaborate base of hers are both beautiful, and for the 40 bucks I paid she felt like a total steal. I do have some minor complaints though. Firstly Tony’s artwork gives her a really lovely alluring expression and I don’t think Orchid Seed nailed it nearly as well as they could have. Maybe it’s the way her head seems more tilted and better framed by her arm. They came pretty close though and she still turned out great. Secondly, why didn’t they use something less opaque for the main part of the base? I would have loved to stick a light under her and have all the ice light up.

Kawaii!!! I needed something extra to bump a Mandarake order past 5k yen so I threw her in, manga and all. Nice and cheap and very much worth it. She is a real cutie and the manga, Vivid #3,  that she came with is a fun little diversion as well despite me unable to read the thing.

Where Nanoha goes, Fate will soon follow so here she is. Pretty damn cute and that pose opens up all sorts of sign holding possibilities. All the nice things I had to say about her companion last month definitely apply to Fate as well. I also threw together a custom base which makes displaying them as a pair easier and take up less room.

Zigg: Very pretty. I’ve always been disappointed that Alter didn’t make a uniform Fate to go with their uniform Nanoha, but these two make an adorable pair. Great work on that custom base too Timmy.

Yep, I bought Kongiku. With Momohime being my first figure and my love for Muramasa’s art style in general there was no way I was going to pass her up, even if she is a tad more busty then I would have liked. After a little while you stop noticing it though. Everything else, from her dress, hair, and face down to her base is all great and the LED in the lamp is an awesome addition. I wished I had some batteries to show it off but it seems I have to go buy some.

Zigg: Dear god, what? BBeautiful figure I’m sure, but she needs to get to a hospital stat. That is, if she can walk without falling over forwards.

Kotetsu was actually something I won via a Tomopop contest last fall (thanks again guys!) and ended up getting a little misplaced. He finally made his way to my doorstep and I must admit, he is really quite cool. He is surprisingly tall for a prize figure and has a lot of great detail to boot. Unfortunately Figma Link is the only guy who really fits in my collection of cute girls so I’ll probably end up giving Kotetsu to the friend who slipped me that Nanoha. If you want to check out all the great details of this prize, including the MADE IN CHINA stamped on his butt, Tomopop has a review up of this exact figure.

Originally intended for a friend, I decided to keep this red headed femshep all to my self after acquiring the black haird exclusive version for him, and I am sure glad I did. Koto did a really fine job on everything from the face and armor to the base with the changeable logo in it. She is a real cool gun welding gal, definitely something I need to look into getting more of. 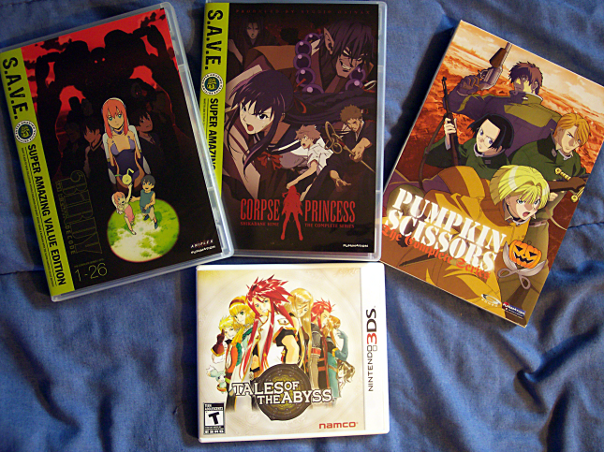 Ahh yea, picked me up some more animes! Birdy is something I watched the first half of and enjoyed and figured I would pick up and finish, Corpse Princess I have watched in its entirety and have wanted to own for a while now, and I have a friend who WOULD NOT SHUT UP about Pumpkin Scissors back when it first aired so I decided to grab it as well. Its always fun to expand the anime library and with what amounts to getting 74 episodes for under $60 the wallet feels really good about it too.

Namico’s Tales of the Abyss.

I have been a bit interested in the Tales series, especially now that I have Alter’s lovely Milla, so it shouldn’t come as too big of surprise that I picked up Abyss’s 3DS port. I have played a little and so far it seems pretty fun, albeit a bit slow in the beginning. Definitely will have to make time to sit down and play some more.

As a Birdy fan who’s been meaning to get his hands on a copy of the entire series for ages, it looks like I lucked out when Funimation announced Birdy as part of their Super Amazing Value Edition releases, intended to be complete anime sets at budget prices. I lucked out even more when I found the Funimation booth selling copies at Anime Boston a good 2 weeks ahead of its official release date. Having already rewatched the series again, it’s as fun as I remembered, and considering how poorly Birdy the Mighty: Decode did domestically in Japan, this is probably as good a deal as we’re ever gonna get. 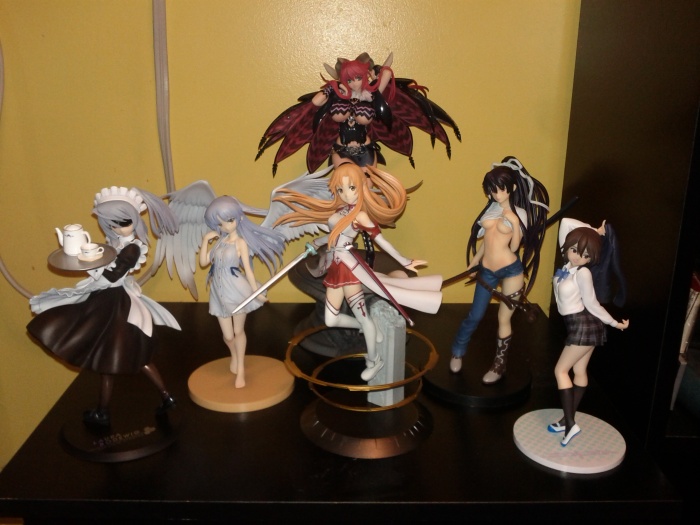 This is my first Orchid Seed figure and I am impressed with the quality. I am a little worried a piece of her top might fall off and leave her more exposed than I would like. The only thing holding her breast.. uh cups? in place is her nipples which double as pegs. She really looks gorgeous. The painting is fantastic and everything just fits into place perfectly. Her cape can be a bit tricky to get off but otherwise her cast off options are all easy access both for taking off and putting back on. She looks great either way but I bought into this set for the crazy designs so I will be keeping her dressed.

Laura is so cute! I have her setup with 2 other maids in my detolf and they look great. Laura has always been something of a weird crush for me. I hate her anime so much that I can’t watch it even for her scenes. Instead I just spent my time on youtube watching clips with Laura in them like some kind of creepy anime stalker and fell in love with the character in the process. Laura I can’t stand your anime, but I’ll be your wife any day! When I saw this figure I knew I needed her with my other maids. Also if you are wondering what Rachel’s cat is looking at so intently… Timmy informed me that that Laura and Mio have similar taste in panties so I guess they match in more ways than I first expected!

Timmy: This figure has tempted me so many times but I have somehow resisted pulling the trigger each one. Only time will tell if she is bound to get too cheap to resist.

Asuna is gorgeous. My camera(phone) can’t capture how great her paint job is. The little details on her outfit are fantastic. I love Asuna’s character design in general but the little details are what really have me so sold on this figure. Kotobukiya nail her vaguely christian crusader mixed with a bit of school girl look. Great colors, clean lines and I could write a whole blog on how awesome the white parts are. Whatever white paint is being used on Asuna’s outfit needs to become the new standard for girls in armor. Her sword and in particular her sheathe look lovely. The mahogany color on the scabbard is gorgeous and I could almost believe it isn’t plastic, but I know better. Absolutely lovely figure all around and I am glad I picked her up.

Timmy: Asuna is definitely one of my most anticipated figures after seeing all the great reviews of her. Unfortunately since I preordered her domestically I still have a bit of waiting to do. To be continued I guess.

Zigg: Absolutely gorgeous. I really like that pose and base too, it makes the figure so much more interesting than just having her standing there.

It’s all about the gap moe! How can I say this in a way that won’t get me banned from the blog… She is fucking hot!… There I said it! If I never show up on this blog again… I apologize. The world needs more older characters breaking into gap moe territory. I know it’s somewhat out of character but that is the whole appeal! I was a little worried about the quality since this is my first Penguin Parade figure, but she came out great. My only complaint is that her one jean leg could use some shading. It looks a bit out of place on a figure that otherwise has some very detailed shading. There is more detail around her navel than an entire set of trading figures and her face is gorgeous. I am glad they got the face right because that was the biggest reason I bought this figure in the first place. In closing: OMGZ ERO KAWWAI! SOOOOoooo Moe! Aqua what are you doing with that axe?

Zigg: I think Life pretty much just proved the point I was about to make.

More gap moe and this time it’s Max Factory and a character voiced by Sawashiro. Hhhhhnnnngggg… Oh you wanted journalism? Well apparently this figure is actually from the first arc and Takeshi is actually the one in Inaba’s body. Is it still gap moe when your body belongs to someone else? Can we ask existential questions about the mechanics of gap moe? If I swapped bodies with Marlin and used the opportunity to confess my undying love for Sawashiro… actually that would just be creepy as fuck. I guess body swapped gap moe doesn’t work so well in practice… but hey this figure looks great and it’s an iconic piece from the show so who cares!

Tenshi is lovely. She has a serene beauty to her and the wings add so much to that. Her skin is pale and there is not much shading but that is true to the character so I can’t really complain. Her sundress looks lovely and despite the simplicity of her pose it captures her personality well. Her wings were a bit of a tight fit but I managed to put her together without breaking anything.

Timmy: So I don’t know if you guys have heard but Tenshi is really, really beautiful. I am going to be sad next month when I can’t use her as the header again. Unless… Hmm.