After the climactic battle with Nui, Ryuko is left in a downtrodden state, unable to bring herself to wear Senketsu. Elsewhere, Satsuki prepares for her 3-way invasion of the Kansai school district. Finally, former Newspaper Club member Shinjiro Nagita seeks out Ryuko, as she stands alone as the sole person able to fight against Satsuki’s tyranny.

After three weeks of waiting, it’s good to see Kill la Kill back in full form. This episode primarily serves as setup for the events to come. With the Elite Four assigned to a pivotal role in overseeing Honnouji Academy’s hostile takeover, things are shifting into full gear for the aspiring tyrant. Despite the relative lack of actual events happening, there’s a fair amount of plot development going on in the background. While Ryuko recovers from her trauma, the movers and shakers of the the world are beginning to mobilize. It’s a shame we still haven’t seen more of Nudist Beach other than Tsumugu and Sensei, but implications made by Satsuki and her mother Ragyo have me thinking that if Nudist Beach is as resilient as they claim, we’ll get to see them in action once Satsuki’s forces have made headway into Kansai. 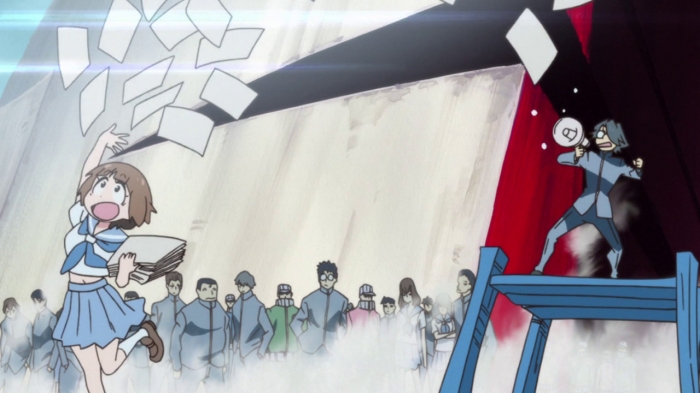 Indeed, the relationship between Satsuki and her mother implies certain things. The two seem to tolerate each other, at least on the surface, but I still hold belief that Satsuki is planning to do something about her mother, and little things, like allowing Nui to wreak havoc at Honnouji show that Ragyo herself isn’t above interfering in the matters of her daughter. What with her talk about original sin and how they relate to clothes along with other crazy speeches, I hope Ragyo lives up to the hype surrounding her as the true final villain of the series. Also, she continues to have the best theme song in the entire show.

Meanwhile, Nagita’s antics and peppy determination finally convinces Ryuko to don Senketsu again, proving to be a truly exciting moment. And with such highs come equal lows. Nagita’s reveal to be Nui in disguise is an amazing subversion of what I had expected to be a rather typical episode. I had anticipated that Ryuko would beat up the bad guys, return to fighting form, and take on Satsuki’s invasion force. Instead, she’s soundly beaten, Senketsu is destroyed, and its pieces taken by Satsuki. I think it’s clear that the next couple of episodes will be focusing on Ryuko getting her fighting strength back and getting back each piece of Senketsu. How she plans to go about that, I can only imagine. With Ryuko soundly beaten not once, but twice, I’m looking forward to seeing how she rises from the ashes. 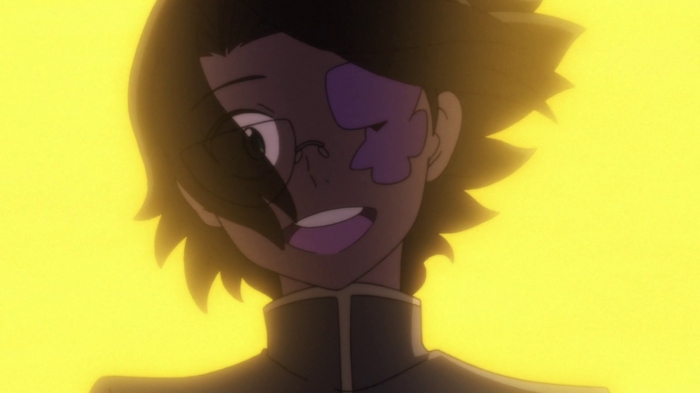 Kill la Kill just never fails to surprise. Coming off of the last arc I was assuming we’d be getting a breather episode, one where Ryuko comes to terms with the monster she became while also giving some more backstory to the world at large. While we did get a little of both, the satisfying conclusion that would be at the end of any other show’s episode is brutally betrayed and cut down so unceremoniously. I would have never thought we’d see Ryuko get so resoundingly beaten so soon. I have to wonder what they’ll be able to do now that she has only a single scrap of fabric. I also have to worry about Mako being shipped off to the war. She has had a pretty sizeable plot shield so far, but then what is the reason to send her off to these fights? Huge props to Trigger for keeping things entertaining and subverting all expectations once again.

It was a smart move to have a slightly slower, more evenly paced episode after the orgy of destruction we got last time, and I enjoyed KLK (relatively) taking a breath to lay in some more plot info. Definitely the major point of this episode (well, aside from the end, but we’ll get to that) was seeing the Kiryuins interact face to face for the first time. I really liked the vibe they’ve got going here – the two seem nominally aligned but you can definitely see the tension and the entire relationship at this point seems to be based around who’ll turn on the other first. Ragyo continues to be intriguing in her own right too. The weird pseudo-messianic vibe she’s got going is definitely something a bit different from the steely Satsuki and her ultimate motive is a bit unclear still, though it certainly looks global in scale.

Meanwhile, Ryuko’s fall into despair is a relatively standard shounen trope, but I really liked how the show deliberately invokes the cliche and then subverts it in a way as to really keep us on our toes. Nagita trying to deliberately set up the classic ‘rescue me’ scenario is a great meta-joke that turns horribly serious once s/he reveals her true identity. Great direction on that reveal shot too, the way the hair flips back is a real ‘oh SHIT!’ moment. The actual destruction of Senketsu is actually a little less dramatic to me, because it’s a development that’s so obviously  temporary it’s difficult to attach the degree of importance to it the story clearly wants us too. As ending twists go it’s a pretty sensational one though. I’m looking forward to seeing how they sort this out, and of course WAR MAKO.