The Flamengers have slain another of the Four Kings, but Hazama still struggles to keep the team together.

We get right back into the action, which I was definitely jonsin’ for. The first fight of the episode was quick but a lot of fun to watch. Obviously, Hazama isn’t going to get everyone’s support day one, but it’s nice to see that even though they don’t work together, the other Flamengers aren’t totally marginalizing him. It’s a shame, though, that the second half didn’t have as much energy or fun as that first fight scene. Our heroes spend most of the episode ineffectually stalking the Big Bads, and once an entire group of baddies arrives, everyone just starts getting hit with swords to no effect other than annoyance. The scene of the Flamengers banding together was really poorly animated, which certainly didn’t help the already lethargic fight choreography. The only bright spot was the hilarious penis ray and the awesome GIGA DRILL BREAKER at the end.

As I was talking with Aqua, we agreed that the real intrigue this episode brings concerns Mari’s fate. Sure, it’s super weird that she’s living with Goto now — who, let me remind you, does have a girlfriend, regardless of how nonexistent she might be in relation to the plot — but it does seem just like Goto to not care about things that would normally cause a stink. I still think it is going a bit too far, though, so I’m hoping Mari isn’t out of the action for too long. After all, her experience with King Torture was a huge part of what turned me around to liking that arc. It’d be cool to see her join the Flamengers, but more so, I’d like to see if they’ll delve into her PTSD a bit deeper. Samurai Flamenco is on record as a show that doesn’t shy away from killing people off left and right, so shaking up our preconceived notions can almost be expected at this point. 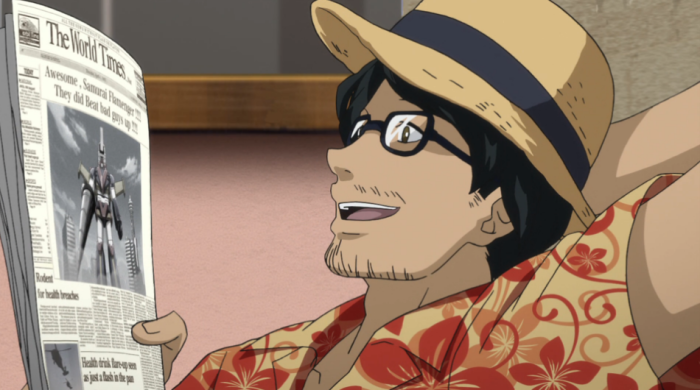 Obviously, they aren’t going to show the Flamengers fighting 64 baddies, so clearly this next episode is going to have some other significance. It could be we may see a transition in the plot already. It wouldn’t be too fast if you ask me, and to be honest, I’m getting a little bored of the Flamengers crew. I do hope having Beardo appear again has more immediate significance to the plot. I need to know what is up with those rodents, man.

One thought on “Samurai Flamenco Episode 12”