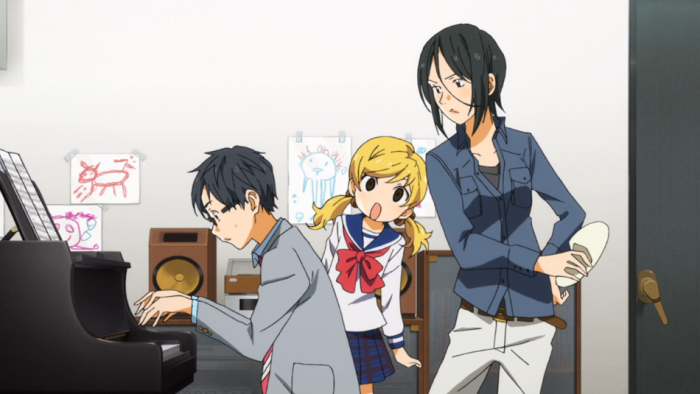 After landing a bombshell on him, Kousei is understandably shaken. Badgered by his friends to see her again, he is reminded of his mother. To clear his head, he decides to play with Nagi at her festival.

I’m glad Kousei has as much of a reaction to Kaori’s destructive thinking as he did. It seems the more she is slipping into despair, the more he realizes he can’t let the past repeat itself. However, it’s what we see from his friends that reminds us how off-putting this show can really be. Without understanding the circumstances or Kousei’s feelings, they decide to berate him about Kaori. Can they not see that he obviously knows something they don’t? What kind of messed up logic is it that Kousei owes Kaori anything after all she’s put him through? It was nice to see a bit more into Nagi’s life. It almost seems like Kousei’s mom makes up for the strictness of the entire cast, as her family acts as though she practices too much. I wonder if it’s just because they aren’t well developed, or because they focus more on Takeshi’s obviously greater talent. Considering their entire house is soundproofed for the express reason of building  pianist you’d think they would be strict on both of their teaching. At school it also seems a bit more idealistic than you’d expect. Despite this seeming to be a very serious art school they don’t seem to have a lot of pressure on their students. It makes me wonder how much background characterization is being sacrificed in lieu of the constant pontificating by our protagonists. Not sure what Kousei plans to achieve by playing with Nagi. I wonder if it’s all really just his way of motivating Kaori, since he seems to make sure she is going to hear it. I hope he’s not going to use it for himself, as he’s already been pretty selfish in this show. Having him steal the spotlight from another junior high kid is not gonna look good. I suppose considering the goofy nature of this festival, at least this is another case of him butting into a non-serious competition.