Searching for the location of Dio’s mansion, the crew must gamble their souls against the mysterious and dangerous Daniel J. D’arby.

This is one of the most famous fights in all of Stardust Crusaders (it has the dubious honor of being one of the handful adapted for the 90s OVA, alongside Iggy’s intro against N’doul and the final string of fights against Vanilla Ice and Dio himself), and one of my personal favorites. Daniel J D’arby is perhaps the classiest villain we’ve seen thus far, and is another great example of how Araki is starting to diversify the Stands of his bad guys. Osiris is useless in any other situation, but that doesn’t matter because our heroes are in this situation, and now have to play by D’arby’s rules. 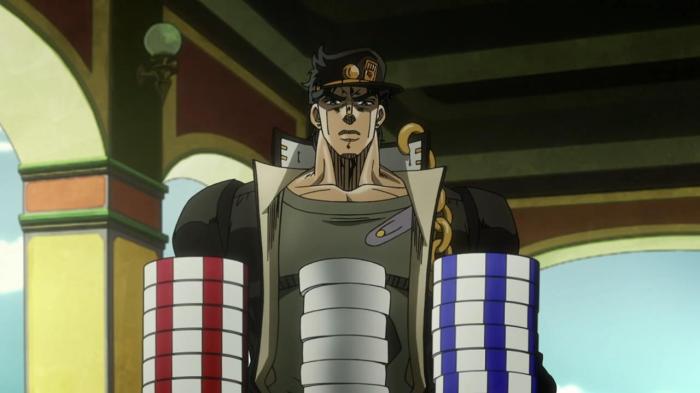 D’arby himself (or as the mid-episode eyecatch states, “D’arby the Elder”; hm…) manages to avoid the major pitfall that previous villains fell into, in that he actually uses his Stand effectively. Hol Horse’s Emperor is a fucking gun and yet he never just shot our heroes with his magic bullets. Boingo’s Thoth can tell the future with perfect accuracy, but Oingo was too stupid to make use of it. D’arby fights intelligently, forcing our heroes into a corner where they have to try and outwit a compulsive cheater. We already know Jotaro has an intense face, Star Platinum is super fast and precise, and Dio’s cult of personality has inspired truly slavish devotion in his followers. Seeing Jotaro leverage all three of these facts to bluff D’arby into submission is a great payoff that doesn’t feel like a deus ex machina.

Speaking of Hol Horse and Boingo, they’re both making a return for the next battle, the tone of which should be obvious at this point. It should make for a nice change of pace after this week’s tense standoff.