Orga, Mikazuki, and company stage a coup, taking over CGS and renaming it “Tekkadan”. Meanwhile, Crank Zent (aka Totally-Not-Ramba-Ral) returns to the battlefield for a fair duel with Mikazuki and Gundam Barbatos.

Mikazuki continues to be our main weak link here. After a mere three episodes, his emotionless-soldier routine is already grating, reminiscent of poorly constructed protagonists like Aldnoah.Zero‘s Inaho. It’s all too common these days to play off an utter lack of character as badass and cool-under-pressure, and it seems that the bulk of the audience will eat that shit up. There are legitimately interesting ways to explore Mikazuki’s character based on what we’ve seen so far, but they all involve his relationship with Orga. Ideally, as we (finally) gear up to leave Mars, the pair will spend more time together to highlight Mikazuki’s lack of drive and direction and Orga’s discomfort around him.

We all expected it, so it was more comical than dramatic to see Crank Zent die this soon. Reconguista in G had two such older mentor characters, who both died rather ingloriously. They all seem to be following in the footsteps of the original Mobile Suit Gundam‘s Ramba Ral, a fan favorite Zeon pilot who was nevertheless a decent fellow. Unfortunately, Crank’s demise doesn’t seem to have affected the plot in any way whatsoever other than giving Mikazuki another chance to show off. He just as easily could have been leading a squad of Grazes as a threshold guardian for the entire group leaving Mars to escort Kudelia, which would have at least had some plot significance.

Iron-Blooded Orphans isn’t doing the best job of keeping me invested, unfortunately. The cracks are starting to become glaring, and it’s becoming difficult to look at the show with anything other than the anticipation of it falling to pieces. 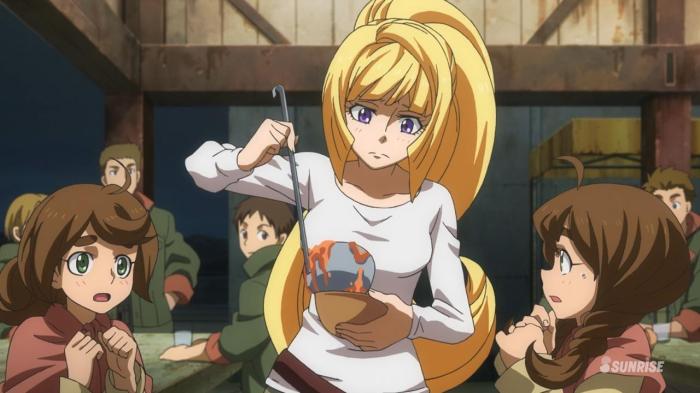