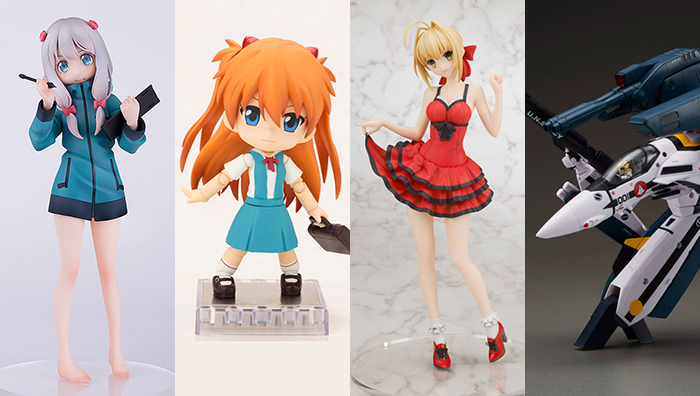 Hello, and welcome to All Your Monies, where The Glorio Blog’s resident toy and figure collecting crew (and Iro) will run down the last week’s new pre-orders, turning a loving or scathing eye over what’s been put out for you to spend your hard-earned cash on. This week we get a glimpse into our dark, dark future

Jel: For public record, I have informed the Glorio crew that we are shutting down the blog when this anime comes out. It was a good run. As for the figure itself, it’s a little girl with no pants so I’m going to say pass.

Iro: Put on some pants.

Zigg: This is a great, very stylish figure that’s got a really sharp pose to. It’s kind of unusual to see a figure of an actual grown-ass man too, so points for that. It’s a neat base as well and you can always count on the ARTFX line for some nice high quality stuff.

Jel: Hey, I remember this show! This is a really cool looking figure and will look even better paired with Nicolas. You’d think I’d get tired of the rubble base thing but it still works great here. I find it amusing that they found some way to flash some abs too, with all the porny female figures out there they’re going to have to do a lot more than that to catch up.

Iro: Too bad Gangsta was a bad show, because it had a pretty good look to it. And we always could use more hot guy figures.

Zigg: Yeah we’ve seen these two a billion times, but I always like the iconic Eva school uniform and the Cu-Poche renditions are cute as a button.

Jel: How are these being made in the year 2016? They’re not even any of the Rebuild variant designs. At this point, it’s Pirate Asuka or nothing.

Zigg: I guess the short skirt is a new look for Saber, but those freakish eyes are jsut off enough to be super distracting. And what’s the point of Saber without the sword and the armour and all that jazz?

Jel: Last week we had black Saber in a dress, this week we have red Saber. This is perfectly fine figure that works well with the character, even if it is a bit boring. I will note I am pleased to see they kept her weird shaped eyes from the actual Fate/Extra artwork instead of her converting her into a more conventional “anime” look. That said, you can do better than this.

Iro: I’m pretty sure this is an alternate costume in CCC, but I was never a fan of any of Red Saber’s wardrobe choices. It seems like a perfectly adequate figure if she’s your #1 waifu and you need more Saber figures on your shelf.

Zigg: This is a big, beautiful and immaculately detailed version of one of the most iconic of the Macross craft. It’s also insanely expensive but honestly that’s kind of par for the course for this style and youre getting such fine craft for that money it’s difficult to argue too much. Look at that tiny Roy Focker in the cockpit!

Jel: Speaking of figures that may not be super relevant in 2016… There have been a million Skull Ones over the past 30 years and this does not look too different than its predecessors. There haven’t been too many at this size (1/60 is quite large, I’m guessing about 10 inches tall in robot form) and that can transform though, so in that sense it’s pretty impressive. My only complaint is it looks very plastic. If I was going shell out that crazy amount of money I would want them to at least make it look like it was metal. Other than that, looks good to me.

Iro: The transforming fighter jets are about the only thing I can look at and immediately recognize as Macross, and this seems like it’s definitely one of those, albeit absurdly expensive. Surely plenty of these already exist, and for less money?