Fridays at 12:30 pm EDT on Crunchyroll

Searching for the Bow and Arrow brings Josuke and Koichi to the residence of the delinquent Nijimura brothers, who have been using the artifact to create Stand-users for a mysterious purpose.

Did you expect Angelo’s mysterious school-uniform-clad benefactor to show up the very next episode? It’s pretty clear by now, but Diamond is Unbreakable is going to have a very different sort of pacing from Stardust Crusaders, despite keeping roughly with the monster-of-the-week format. Instead of a globe-trotting adventure, we’re going to be staying entirely in Morioh Town, tracking down the Stand Arrow as it changes hands. Spoiler: the unseen user of Red Hot Chili Pepper isn’t going to be our Big Bad. We’re only 5 episodes in, after all, and nobody in Part 4 quite has the same overwhelming presence Dio had to carry the entire arc. 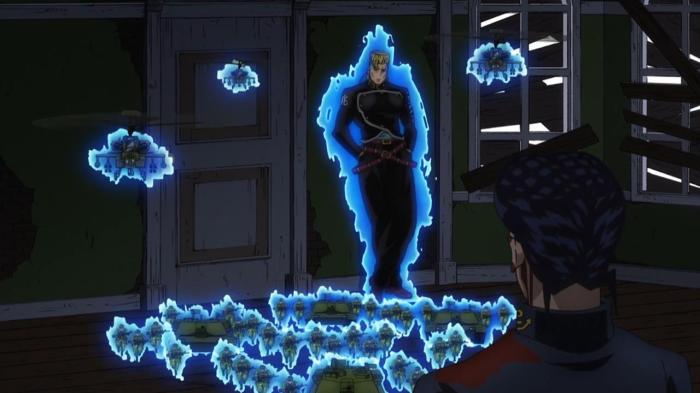 Anyway, this time we meet the eponymous Nijimura brothers, one of whom will be joining the regular cast per shonen defeat-means-friendship rules and one who dies in a hilariously grisly manner per classic JoJo tradition. Their two Stands show more creativity than basically the entire first half of Stardust Crusaders, and should provide a decent picture for how DU is going to pan out. The Hand (or, ZA HANDO) gets comparatively less screentime, but we’re also going to see more of it with Okuyasu joining the crew. The ability to “erase space” is similar to Vanilla Ice’s Stand, Cream, but with the added effect of the world gluing itself back together afterward. I assume Araki thought it was a bit of a waste to retire a power so quickly.

We saw Stands start to stray away from purely humanoid “punch-ghosts” a bit in Part 3 with Oingo & Boingo, N’Doul, and Anubis, among others; Keicho’s Bad Company is a bit of a half-step, being a bunch of tiny army dudes. It makes for a great visual, particularly since each army man shares the sort of weird, robotic look that some of Part 3’s Stands did. The battle is one of Part 4’s weakest, however, without any real back-and-forth and a somewhat odd conclusion. The amount of control that Josuke and Crazy Diamond have over the way things they punch reform is pretty variable over the course of the show, but making missiles reform and launch in a different direction rates low on the overall scale.

As for other new Stands, Koichi’s mysterious egg and the villainous, electric Red Hot Chili Pepper also showed up, but we can save those for when they get the spotlight. In fact, we should be getting a Koichi episode just next week. He’s maybe my favorite character in Part 4, so I’m definitely looking forward to seeing his fights animated.

Bad Company is one of my favorite totally underrated Stands.