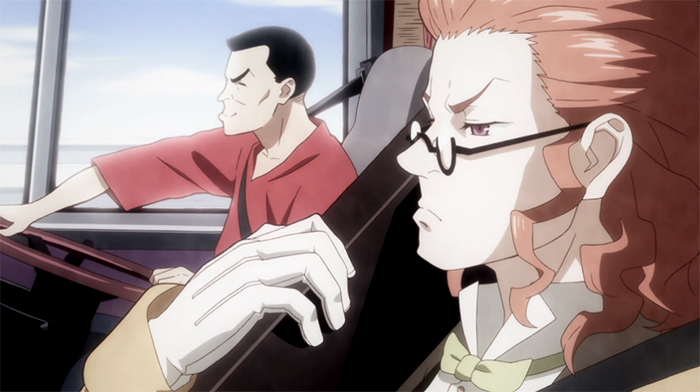 The Roundup keeps on truckin’ with our usual batch of animes. Artemis is back but a few shows find themselves flirting with the chopping block, if not being cut altogether. You’ll have to read on to find out more, but I’ll tell you now I would probably never cut a show in which someone can say “Beethoven-senpai” unironically.

Jel: I’m still not sure how we’re supposed to feel about Chitose. Are we supposed to be cheering her on and hope she improves as an actress and a person, or are we supposed to be happy she got a bit of her just deserts this week? Even looking at our little idol group as a whole, I’m still not sure what they’re going for. If this show is going to be about the girls bonding together and making everything OK through the power of friendship, I don’t know if I would keep watching. You can see hints that we’re going that direction in how even the most aloof member is starting to warm up to the others. Now if it turns out the girls decide to team up and destroy the industry from the inside, THAT would be a story I could get behind. Please let that be true.

Girlish Number – The cast personalities summed up in one screenshot

Artemis: This was, for Yuri On Ice, a comparatively lacklustre episode – which means that in general anime terms it was only good instead of spectacular – but coming from the glorious high that was episode three, I couldn’t help but feel a tiny twinge of disappointment. It seemed to lack focus, darting in and around characters and lines of dialogue too quickly to get quite as much emotional impact as there could’ve been, given Yuri’s otherwise solid character development. The moments of warm humour that I’ve always loved, coming mostly from Yuko and the triplets, felt overly frenetic this week and a little out of balance, taking away from the more weighty scenes rather than adding to them. Those explanatory interjections especially, while delivered with their usual cuteness, were so blatant as to be jarring. However, it does bear repeating that these are all relatively minor complaints in the grand scheme of things, and mostly proof of the very high standards I now have for this show.

Aqua: All hail Nishina! Lezzing up what up until now had been a rather cookie-cutter harem show is how Kiss Him, Not Me won me over when I first read the manga, and the animated version is happy to do it all over again. Not only does Nishina’s appearance help bridge the hitherto frequently blatant gap between the sweet princess Kae’s become and the unhinged nerd she’s still supposed to be, it also ups the zany freak-outs this show taps a lot of its humour from by a considerable margin. Sure, casting Miyuki Sawashiro as a handsome, flirty lesbian isn’t exactly the most original pick, but her husky charm is a perfect match for the absolutely delightful performance Yuu Kobayashi turns in this episode. Someone bring in Kana Hanazawa and there won’t be any more scenery left to chew. Anyway, if last week was a bit lacking in the man-on-man-service Kiss Him, Not Me promised, this week’s considerably more otaku-focused episode more than made up for it. Heck, they even threw in some hanky-panky from the, errm… other side of the spectrum, just to shake things up. With Nishina taking such a tremendous head start, the boys seem due for a temporary alliance if they ever want to restore the boring, balanced harem status quo of yesteryear – or at least for some serious pondering on why they’re so attracted to this girl in the first place. In any case, nothing will ever be the same again. Maybe. Probably not.

Kiss Him, Not Me! – Stupid Sexy Sawashiro

Jel: This was easily my favorite episode of Classicaloid yet as it really felt like the show hitting its stride. We’ve settled in with the concept and our weirdo cast of characters and now they can just do their thing. It helped that the formula was mixed up a bit as we finally got out of the mansion, and Schubert’s oblivious journey across Japan gave us a dose of dry humor that felt great after the loud and wacky hijinks of the first few episodes. Well, I guess there was still some of that too, but it blended together nicely to create a very entertaining episode. I still don’t get the baby thing though, maybe someone more up on these composers can fill me in.

Zigg: While Time Bokan‘s last excessively Japanese episode managed to dodge any sort of accessibility issues by just being insanely funny all over, this one doesn’t manage that and as a result is by far the weakest outing for the crew yet. The whole Tottori/Shimane thing just doesn’t resonate with anyone who isn’t intimately familiar with Japanese geography and culture, and it’s hard not to be disappointed that they throw the opportunity for a great Halloween episode away by choosing to focus on this instead. Even the robot battle at the end is underwhelming, focusing as it does on yet another bad Japan-centric pun. There’s still some fun to be had though, what with the bizarre quiz show premise, and the completely unexpected audio cameo from Vangelis’s Chariots of Fire is either the most blatant copyright theft we’ve seen in forever or further evidence that Tatsunoko has way too much money to throw away on five second jokes.

Izetta: The Last Witch – The army will find a use for any talent. Even cosplay.

Aqua: Oh dear, are we actually doing this? Seems like it. As I mentioned last week, I’ve no real problem in theory with Izetta tackling the touchy topic of war propaganda. What I do have a problem with, however, is the fact that after two weeks, it still hasn’t figured out what it’s actually trying to say about said topic. The stock plot Izetta‘s going for here only ever works when the irony inherent is evident and the main character realises it’s impossible to live up to the expectations that have been forced upon them. It’s a plot point frequently used in young adult fiction because it symbolic of a real-life societal ill: The guys in charge will gladly put women (or teenagers, or teenage women) on a pedestal, but often rips away their agency in the very same move. Izetta lacks any of that cleverness because the titular heroine actually can and does live up to the myth being built around her, even when powerless. The only thing truly holding her back is that fact that she has all the moxie of a doormat. Sure, you can in fact suffer from a debilitating inferiority complex even if your usefulness has been proven time after time again, and sure, it is possible to write a great story around that psychological paradox. Yet Izetta’s angst, as with so many other aspects of her show, is so superficial it frustrates more than anything. Besides, when even Love Live! can do better character writing, it’s probably for the best if you just quit while you’re ahead.

Artemis: I’ve reached the end of my patience with this one. Or rather, Izetta more than exceeded it with last week’s episode, and I just gave it one more shot in the vain hopes that anime would basically stop being anime, more fool me. I’m sure there are plenty of viewers out there who are happy to look past the incessant framing of Izetta’s breasts in every other shot, to say nothing of that terrible excuse for a tutor/reporter whose hobby is molestation. However, to me these persistent problems aren’t just random bits of fanservice thrown in for shits, giggles, and audience numbers but rather are symptomatic of an issue with the basic storytelling. Izetta herself is an enormous weak point in the show – such a huge and unwelcome contrast to Finé that all the decent character work from the first couple of episodes has now been totally undermined. Throw in a really bad Because Plot Convenience moment this episode, paired with some comically overdramatic scenes complete with mood lighting, and I’m done. 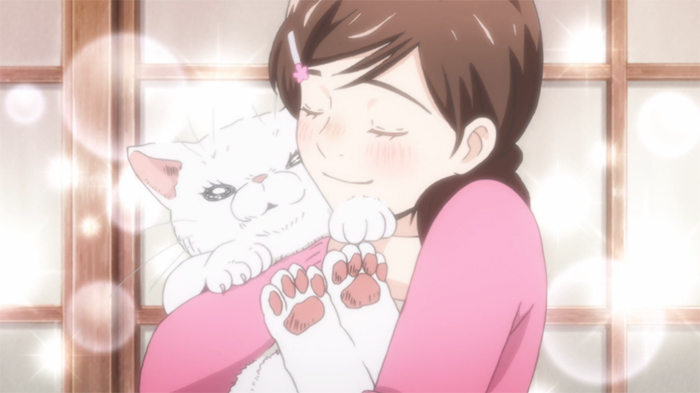 Jel: No shogi and plenty of character development means I really loved this episode. Hina’s chapter was much more about her relationship with her big sister than whatever was going on with the dumb boy she likes. Their little miff was adorable and highlighted the subtle difference between Akari being her mother and Akari being her sister who has no choice but to also be her mother. It’s bittersweet when you think about it, but so is everything else in this show. Speaking of which, Rei’s “love” triggered flashback certainly raises an eyebrow. I wonder how much of his troubled past we are going to learn about. I think I would be OK if we only see glimpses and just know he had problems, in a way the details don’t matter as he is slowly healing and moving on. On the other hand, you usually have to confront your demons to move past them so I could see it going either way. For now, let’s just enjoy the ride.

Artemis: I think the problem with this show for me is that it doesn’t seem to be going anywhere. It’s not a pacing problem so much as it is a focus problem; I actually tend to really enjoy relaxed, slice-of-life shows regardless of whether they involve kids or not, but as undeniably adorable as Poco is, it also doesn’t seem to be heading in any particular direction. There’s no kind of goal or end-game in sight, nothing to emotionally root for or against, and so I’m having a hard time trying to like the show beyond a vague “oh, that’s cute” sort of way. The lack of story wouldn’t bother me if there was some solid character development to make up for it, but nothing much is happening on that end either, which means all I’m left with is a sweet but largely empty shell. Poco is going to have to deliver something more substantial and soon, otherwise I don’t see a whole lot of point in continuing no matter how pleasant the setting.