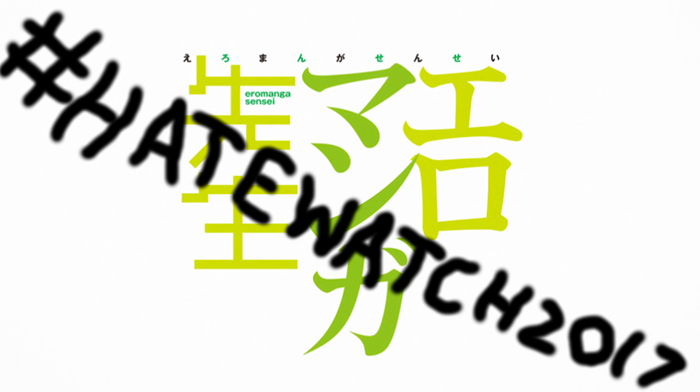 Clearly Jel is not the graphic designer for this bit.

Sometimes a show comes along that just deserves to be eviscerated. Perhaps it showcases the worst of anime’s stereotypes. Perhaps it takes an interesting premise and ruins it with befuddling plots or infuriating character arcs. Perhaps you think a show should literally be labelled a war crime by the Geneva Convention. That’s where the HATEWATCH comes in. When the show does it to such a degree, sometimes you need to watch it just for the cathartic value of demolishing whatever dreg of culture or bad taste it represents. This is #HATEWATCH 2017. The show: Eromanga-Sensei. Its sins: You do know this is from the Oreimo guy right?

At first I was perfectly fine letting this atrocity pass me by. I obviously heard through our April Fool’s joke that this show was going to happen, but I thought it would be just another trash show in a sea of filth. However, once details came out from the crew about Episode One, I was abhorred. I couldn’t believe that the things being talked about were real and not just exaggerations for effect. I was so enraged that I had to watch it for myself. I had to know: Clearly a human being couldn’t have produced this work. Also, a human being couldn’t’ve possibly allowed this work to become an anime. Finally, there is no way a group of people could work on this reality without going mad from despair. Unfortunately I was wrong. The first episode of this show is probably the worst mix of pedophilia and self insert fantasy since “Listen to me Girls, I am your Father!“. Lines said in the first episode seem like the evil version of Seiren or G-Reco, where it seems like an alien trying to write them but instead of accidentally not understanding human relational constructs it is actively trying to undermine them.

It was by the time I started watching episode 2 that a thought occurred to me. In the ancient philosophical work, The Republic, it is described that a perfectly just person, one that pursues justice for its own ends and not for self-profit, would be seen as the most unjust person alive. He would be derided, mocked, and eventually killed. The perfectly unjust man, however would be seen as a paragon of virtue. His commitment to injustice would be so perfect that no one would ever think him to be unjust, otherwise by exposing his injustice he would be open to being punished, and thus be treated justly. In the same way, I think Tsukasa Fushimi is the perfectly satirical man. How else could he craft such a complete piece of garbage and be wholly unaware of how terrible it is? My only rationale -indeed, the only rationale that would keep me sane- is this hope, that Fushimi is making a work of garbage so magnificent that no one would ever doubt that it is just a complete work of garbage and nothing more. Society has corroded to a point where this work is acceptable and Fushimi is rubbing that fact in our faces by making this work and being successful while doing it.

I am really glad that this episode showed the boilerplate trash that the MC wrote last week was boilerplate trash. It would give you some hope that maybe this is a satire of Light Novels, but then a drillhaired loli barfs all over the screen and that feeling goes away immediately. I don’t quite get what Fushimi’s obsession with teenage professionals is, but this is getting ridiculous. Not only is she the most annoying thing on the face of the planet, but she’s dressed like she fell out of a fantasy shoujo show with absolutely no explanation and it’s all just the worst. Then at the very end, they have this scene which I swear has to be rotoscoped animation, which means they got a real person to pretend they’re a twelve year old and now I’m suddenly not sure this series is going to even last past one episode. To save us from going over every terrible thing that happened (and Jel shows just how long that would take), I’m gonna steal a note from Aqua’s playbook with some… 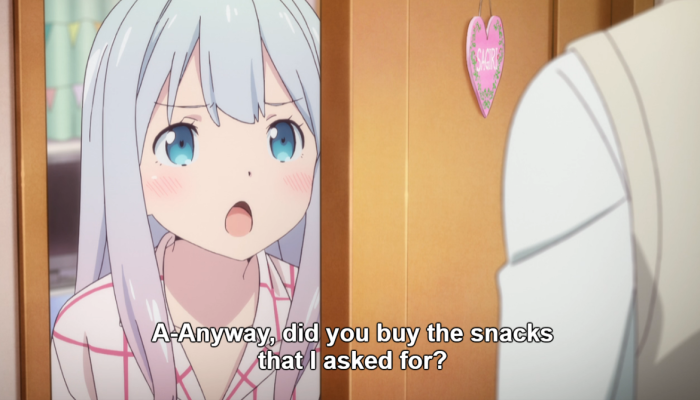 Fushimi once again showing off his trademark ability to make all his characters have absolutely zero redeeming qualities.

I don’t even need to write a review of this episode, I’ll just give a play by play of the first two minutes. The only context I’ll give is later on we find out Sagiri aka Eromanga Sensei herself, the girl who draws sexy pictures using herself as a model, is supposed to be attending her first year of middle school. That is the American equivalent of 7th grade. So like 12 to 13 years old.

0:03 Girl with annoying squeaky voice starts talking
0:12 Suggestive skirt flip while she steps up into Izumi’s face
0:26 Girl wonders if it’s OK for him to live alone with Sagiri since they’re not blood related
0:47 Girl insists on being called a dumb nickname because she wants to get along with Onii-san too
1:09 Girl wonders out loud why hasn’t Izumi fallen in love with her yet
1:14 Izumi violently denies he’s gay like it’s a terrible affliction
1:22 He reasons that he washes his sister’s panties every day, how could he fall in love with this less attractive girl
1:34 Apparently having a 12 year old girl saying she loves dicks is funny
2:00 “I’m sure your little sister loves dicks too.” Just in case you thought Jel was joking. Oh how I wish he was joking…