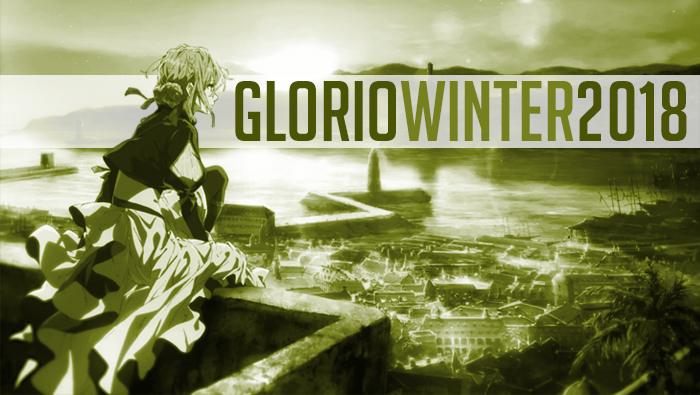 You know what’s weird? Kyoto Animation has not done a TV series in a year, the last one being Ms. Kobayashi’s Dragon Maid in the Winter 2017 season. Consider that one more thing to add to hype machine around their stunning Violet Evergarden, which headlines the second part of our Winter 2018 preview guide. The rest of Part 2 is a bit of a mixed bag, but there seems to be a few other shows worth checking out. What’s everyone else got their on eye on?

You can check out Part 1 of our guide here.

​When her brother and nephew are kidnapped a cult, Juri conveniently learns that their family has the power to stop time. They are not the only ones with this power though, and naturally things get complicated. If anything consider my interest piqued by having an adult woman protagonist starring in a serious action thriller. The trailer looks solid, although with a brand new studio handling production you always have to wonder about consistency. Still, I think this may be one to keep an eye on.

The Ryuo’s Work Is Never Done!

​From the creator of the completely forgettable comedy No-Rin: another completely forgettable comedy about a high school shogi player who revitalizes his career when he meets a genius elementary school player. Just going to call it now, cue the pedophile jokes! It looks like there’s a few other haremettes to fawn over our hero, so all your waifu bases should be covered. I’d like to give the show some benefit of the doubt but it’s hard given it’s pedigree. Besides, we already have enough anime shogi to keep us busy this season.

​Takagi is really good at teasing Nishikata. He tries to get her back but fails every time. That’s pretty much it, and yet this totally looks like something I will like. Cute kids not realizing they’re basically dating is a sure fire way to melt my cold dead heart. Like I want to give them a 1000 yen bill and tell them to go get ice cream or something. Is that weird? ANYWAY, I’d be ecstatic if this ended up being the low key cousin to personal favorite Tonari no Seki-kun, but I do wonder if the full lengh episodes will be difficult to pad out. Either way, I’m looking forward to it.

​I normally don’t include sequels in our previews if none of us watched the previous series, but it seems like this new Basilisk is a fresh enough start (and twelve years removed from the original), so let’s give it a look. It’s a story about warring ninja clans with some of your favorite Sengoku era people and places. This particular series takes place in a time of peace when ninjas don’t seem to be necessary, although I will put good money on that changing very quickly. I’m not particularly craving a revival of a mid-2000’s ninja anime but if you’re feeling nostalgic it might be worth a look.

​No, KyoAni, you’re not getting me this time. I don’t care if you’re delivering a series with cool robot ladies, a vaguely turn-of-the-century setting, and absolutely STUNNING animation. I can’t get the lukewarm taste of Beyond The Boundary out of my mouth, whose director happens to be helming Violet Evergarden. That boring, middle of the road mess was extremely disappointing given the absurd production values and decent enough premise. This has an even more interesting setup: A former soldier named Violet is an “auto memory doll”, basically a robot, who joins a company that rents out dolls for various daily tasks. Combined with the setting, it looks great, but I am keeping my enthusiasm in check for now.

​Hazuki is a lonely girl who reads books to escape, quite literally as one of them transports her to a MAGICAL WORLD. Yes, in this MAGICAL WORLD is a MAGICAL SCHOOL, full of other cute girls with MAGICAL POWERS. I suppose the hook is the girls get their powers based on various fairy tales and folklore, with our main heroine naturally granted the power of Cinderella. I’ve never heard that before! Sarcasm aside, it sounds harmless enough but then the trailer opens with the main girl standing there naked for an uncomfortably long period of time. No thanks, I’ll pass.

​Here you go folks, my #1 prospect for worst show of the season and potential candidate for season 3 of #HATEWATCH! Let me try to get through this: our hero is a programmer who takes a nap and wakes up in a fantasy world. For some dumb reason, he gets super rich and there’s a harem of ladies that want to bone him. The trailer doesn’t show much aside from some bad CG lizards and the blank, lifeless eyes of our generic protagonist whose completely non-distinct, slightly smug face makes me want to punch it. Maybe someday Shin Oonuma will direct something good again, but today is not that day.