High school boy Kouta Hasegawa has a love of Sanrio characters, but was bullied as a child for his ‘girly’ tastes and is now too ashamed to display his love openly. Feeling as though he is missing out on something important in life, he nonetheless goes about his high school days as usual – that is until he bumps into a popular group of boys with a similar affection for Sanrio characters, at least one of whom is entirely honest about his hobby.

Artemis’ verdict: Too Cute To Kick

Well now, this is a surprise. Truth be told, the series wasn’t even a blip on my radar – but for it being assigned to me by our Glorio overlord, I wouldn’t have watched it at all (which probably would have served me right for being such a cynical viewer in the first place).

Don’t get me wrong, I’m hardly head over heels in love with Sanrio Boys. It’s not going to be the show of the season by any stretch of the imagination, given its insistence on almost embarrassingly transparent displays of manservice coupled with its roots as a blatant advertisement for Sanrio. I’d be happier if the company stuck to accessories and school supplies rather than anime (isn’t Hello Kitty making them for than enough money as it is?), and was expecting something along the lines of last summer’s dull Convenience Store Boyfriends as an absolute best-case scenario.

In fact, I quite like the premise of a high school boy liking cutesy Sanrio characters but being too embarrassed (and traumatized by his previous experience) to admit it. I have no particular love for Sanrio myself, but I think just about anyone can relate to liking something that society or their peers might generally frown upon, either because it’s considered too immature for their age or else because it’s simply not gender-appropriate. Sanrio Boys probably won’t be winning any prizes for depth, but that’s actually a pretty decent start for a story, and is charming enough that I’d feel like a bully myself if I teased it too much for it. That goes doubly so thanks to the sweet old grandma (god rest her soul) and at least one pair of clearly supportive, caring, and understanding parents.

Add to this the generally pleasant artwork and vibrant, upbeat atmosphere and this is, surprisingly, a fairly solid opener. I don’t know whether or not I’ll be sticking with Sanrio Boys all the way through, but it’s at least earned a second episode from me. 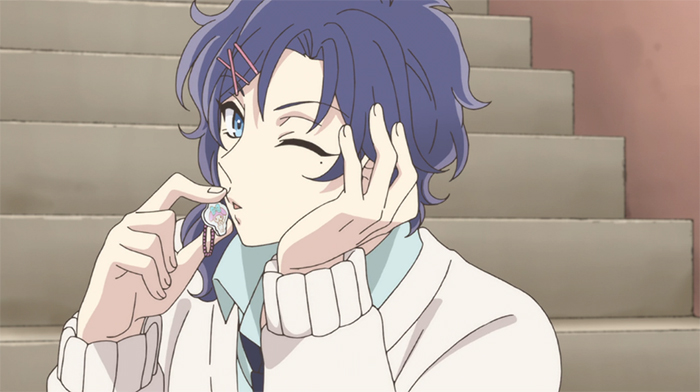 My cynical side wants to see this as a laser focused marketing ploy aimed at a specific demographic a la Sanrio’s previous Show By Rock and they happened to stumble upon a positive message in doing so. My faith in humanity wants to believe that they actually mean all the good things they are doing to combat toxic masculinity. I guess if you think about it, there’s no reason both of those of statements can’t be true. Sanrio Boys feels like a group of people given a corporate mandate to sell more toys and deciding to use that opportunity for good. Tugging out our heart strings with a story about grandma might have been a cheap emotional shot, but the entire point of how guys feel pressured to suppress their feelings was very valid. At the very least it’s a whole lot more than I was expecting out of toy commercial.

As to whether I’d keep watching, I probably wouldn’t. I feel like they kind of already said everything they have to say. And there is that commercial aspect that’s really hard to shake. Aside from the shameless product placement, the gratuitous camera ogling makes it hard to take things as seriously as we could. I mean, they even used the classic “long shampoo bottle” censoring in a random shower scene. So while this was certainly a lot better than I expected I don’t see it getting past its premise enough to be truly worth it.