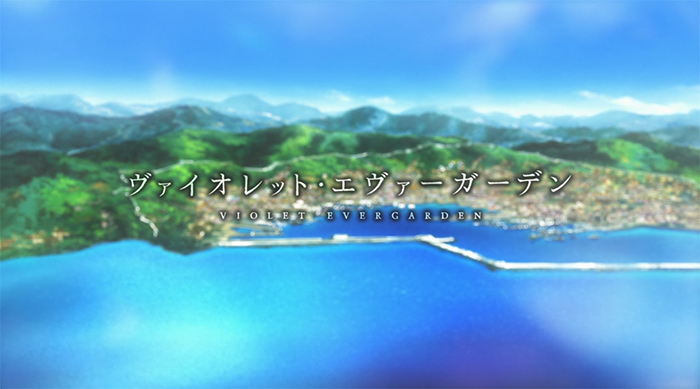 Still recovering from her injuries during the war, Violet is taken in by a former commanding officer who gives her a job working at his delivery business. It’s there she meets the Auto Memory Dolls, women who dictate letters for those who can’t write.

I’ve been saying for years that Kyoto Animation wants to be the new Ghibli, at least in terms of mainstream success. Part of that has been a shift in focus to theatrical releases. In doing my research for Violet Evergarden, I was shocked to realize that they’ve only done three TV series (counting both seasons of Sound! Euphonium as one) in the past three years. In that same time span they’ve done TEN theatrical releases, including their mainstream hit, A Silent Voice.

I bring that all up because I feel like things have quietly been changing for Kyoani and you can feel that difference in Violet Evergarden. Sure the familar character designs and flawless technical execution are there, but it’s very cinematic. It feels like a movie. There’s a level of maturity and refinement that feels far removed from the silly “cute girls doing cute things” shows the studio grew famous for. It doesn’t feel like anything else they’ve done.

A big part of this new feeling is the setting, which is also probably Violet Evergarden’s best asset. Taking place in not-Europe shortly after not-World War I, the post-Victorian turn of the century style feels very original for an anime and provides the basis for a rich, detailed environment. Basically, it’s not a Japanese high school, not by a long shot, and that is good. Throw in a light dash of science fiction and you can color me further intrigued. 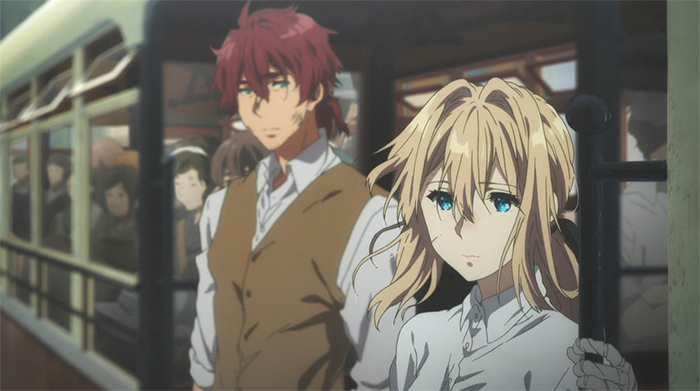 Then we have the actual plot, with the cast recovering after the end of a horrible war. Violet herself is intriguing as it’s not clear exactly what she is. Is she an auto doll? Is she human? Some combination of both? Regardless of her origins, we’re setup for a classic “robot learns about human love” type of story in a setting where love is badly needed. Sounds great.

So with all those nice things to say, why am I not jumping up and down and declaring Violet Evergarden the best show of the season? As beautiful and technically flawless as it is, it’s almost too perfect. Maybe “dry” is the right word. There are hints at real emotion, particularly in the melancholy of former Colonel Hodgins as he settles into his post-war life and in Violet’s unconditional devotion to her former master. But I’d like to see more. Fortunately there is a lot of potential here and I think Violet Evergarden can reach it. I’ll be staying on board to see how things pan out. 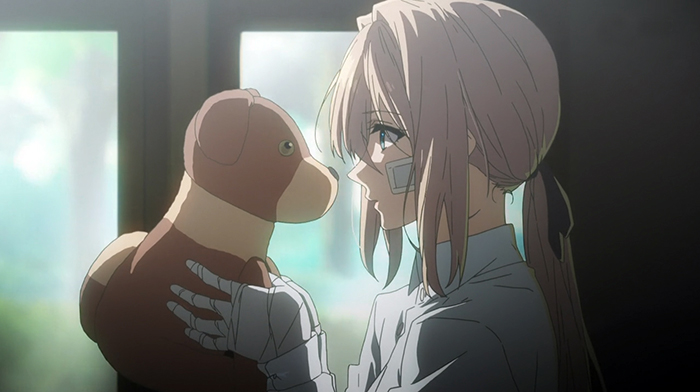 With the episode review out of the way, I want to take a moment to mention what’s going on with Netflix and the official release of Violet Evergarden. Feel free to check out if that doesn’t interest you.

Netflix has been a thorn in the side of anime fans in the past year, holding up simulcasts and making those of us who want to watch anime legally wait months to see their series or resort to other means that we’d rather not resort to. Obnoxious apologists have offered a number of reasons for this, but the release of Violet Evergarden has thrown those out the window. The first episode is currently simulcasting in just about every territory EXCEPT the US, and to add further insult it’s WITH an English dub. Waiting for a dub is literally the only reason you could almost justify the delay. I would love to hear to some kind of explanation on this as there’s no logical business reason for it. I’m guessing there must be some kind of bad contract or other legal issue. Regardless, having it stream in other countries and not here feels even worse than not having it all and I’m extremely disappointed.

Gee’s verdict: So Is She A Robot Or Human or What?

Violet Evergarden might legitimately be one of the most confusing shows I have ever watched. Initial previews seem to indicate it was going to be a show about a female war robot learning how to find meaning in a postwar society, a concept I could easily see myself getting behind, despite my usual anti-KyoAni stance. What I got instead was basically that premise, but with a ton of confusing and unexplained worldbuilding thrown in too. Most of this centers on Violet herself, whose condition still utterly confounds me. Is she a robot? Is she a cyborg? Are those limbs cybernetic prosthetics? If she’s just a normal human, what was the source of her amazing combat prowess in the flashbacks? What are Auto Memory Dolls? The ones at the end of the episode looked human. Is robotics technology so advanced in this early 20th century anime Europe setting that they can develop androids that look identical to human beings? In that case, then why do Violet’s arms look the way they do? Each question just adds more questions that the show doesn’t even bother to try to answer.

None of it makes any sense and even though the basic story itself is the simplest thing in the world, I struggled to enjoy it or KyoAni’s usual high level of (sterile) craftsmanship because these questions would not stop bothering me. I’ve watched enough fiction to know that sometimes you have to turn off that part of your brain, but if Violet Evergarden’s tone asks me to treat it with the same level of seriousness as it presents, then it needs to be able to present me with a setting that’s not so easy to shoot full of holes. Maybe your average KyoAni fan is fine just turning their brain off and watching the cute girls do cute things, but this is the first KyoAni work since Nichijou that has elicited even a modicum of interest in me and I was hoping it was going to do more with its potentially fascinating setting. At this point I’m going to keep watching just because I’m so damn confused and have literally no idea what are even the founding principles of the worldbuilding of this setting and need to see if KyoAni even cares enough to answer them. 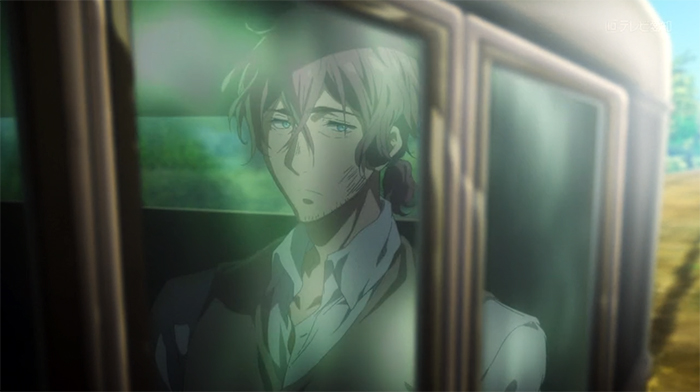 I seem to have a more positive take on Violet Evergarden than either Jel or Gee, and I think that’s at least in part because my expectations were considerably lower. To say I’ve liked nothing that KyoAni’s put out there would be a lie (because Hyouka), but I was left cold when everyone else seemed to be talking about nothing else aside from the likes of Haruhi Suzumiya, Clannad, Nichijou, Chuunibyou, and most recently Euphonium. What can I say, I guess I just don’t care all that much for cute girls (with exceedingly high-pitched voices) doing cute things while the camera focuses on their legs a lot.

Having not paid much attention to Violet Evergarden before it began officially airing (nope, I didn’t watch the trailer – I rarely do), I wasn’t necessarily expecting that a) the main character would be a largely emotionless young woman/cyborg/robot/whatever who did not attend high school and b) she would be set against a pseudo-European and immediate post-war backdrop. So basically, my expectations were already exceeded within the first 30 seconds of the premiere. 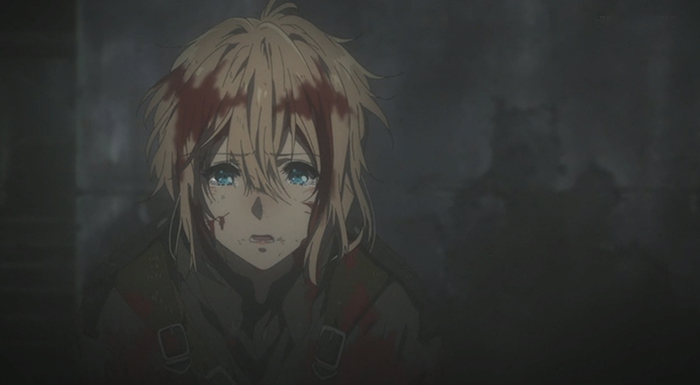 I’m not saying I’m now a major fan of KyoAni or even of this particular series, but there’s definitely enough going on in the first episode of Violet Evergarden that, despite all the unanswered questions, I’m extremely curious to see more. On a technical level, there’s obviously been a lot of work put into this, but what’s really selling it to me right now is the setting and potential for some fantastic world-building. I’m quite happy if the mystery of Violet herself is unraveled bit by bit, so long as the former is given its proper due.