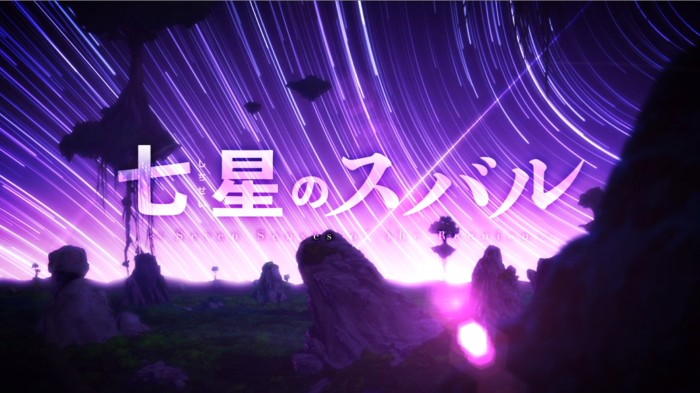 Subaru is a famous and talented party in the popular MMO Union secretly made out of six elementary school friends…for some reason. They take down tough raid bosses despite the risk of character permadeath. After a raid, one girl in the group dies,

Seriously, I don’t see any reason for this show to exist. The plot and characters are nigh identical to AnoHana, from the elementary school beginnings, to the airheaded girl dying, to the MC’s feelings of guilt, right down to the plot revolving around six characters and our old friend the Relationship Centipede™. I would give less than a 1% chance that changing it to an MMO story could actually bring any kind of nuance or good writing that AnoHana failed to achieve the first time around. I also already hate how one-note the characters seem to be. Say what you will about Menma, she is meant to still be like a child. The rest of the cast actually had some depth, and the way their messy relationships played out needed the experienced hand of a dramasmith like Mari Okada.

CLEARLY NOTHING BAD WILL EVER HAPPEN

If they manage to make some .hack// kinda story on how she’s in the MMO, and is not actually like a real ghost or something, then maybe that would be a bit of an interesting twist on the idea. While I’m not a fan of some of the MMO designs, at least they use the more ridiculous elements of this setting. This is especially so when we find out the main character apparently has his own Rosencrantz and Guildenstern to drag him back into the MMO. Unfortunately, I have to imagine he’s going to ditch them quick to get into dramatics with the former party members. That said, I suppose if we really are as starved for options as we think we’re going to be, there’s certainly a lot worse you could spend your time on.

Every single review or comment about this show I’ve seen has compared it to AnoHana and almost all of them have mentioned Sword Art Online. I was expecting to find similarities but I was not expecting a near point for point ripoff. Aside from the precocious kids losing their childhood friend and then dealing with it years later thing, all the characters and their relationships line up the same. Add a layer of game systems that completely copy the concepts from SAO and I’m hard pressed to find a single original thing about this episode.

Haruto pictured contemplating his sad existence as a total ripoff.

Even taking away that context, this show is just not very good. Say what you will about AnoHana, but it at least took the more interesting path of starting in the present day and unraveling the mystery of what happened in the past over time. In this case we get the typical light novel info dumps, including a hilariously bad scene where the main character literally watches a news report to bring us up to speed on the situation. Not even the core concept is good as adding game elements to the personal tragedy has zero benefit at best and distracts from any emotional connection at worst. Basically this show is a ripoff and a failure and you shouldn’t watch it.