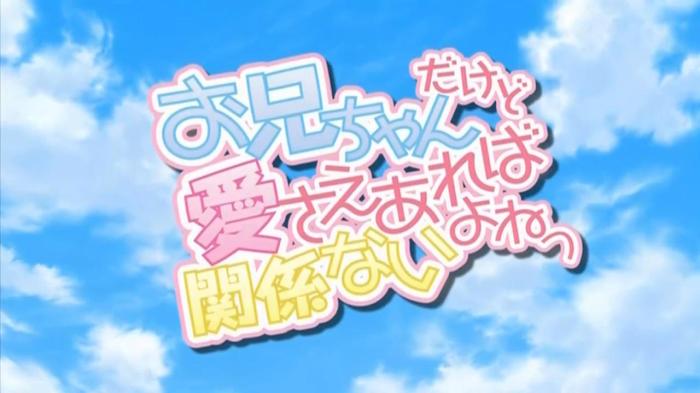 Premise: After six years apart, Akiko Himenokouji is funally going to see her brother again, but therOH GOD STOP NO YOU CAN’T MAKE ME DO THIS I’LL GET OUT OF HERE AND ESCAPE THIS NIGHTMARE YOU’LL SEE THESE CHAINS CAN’T HOLD ME NO STOP WHAT ARE YOU DOING AAAARRRRRRGGGHHHH

I like to think of myself as a connoisseur of bad media. There’s a certain thrill, a certain glorious absurdity to something so breathtakingly bad, something that so outreached what it aimed to be, that there can be amusment or interest in consuming it. I volunteered/was press ganged into taking this show in the hopes some of that absurdity could be found here. The point is, my pain tolerance is high. therefore, pay attention when I say to you:

Do not watch this show.

Even if the entirely repulsive concept didn’t turn you off already, the appalling execution of every part of this endeavor will. There’s not even the barest hint of a story, of any sort of likeable personalities or, god forbid, any humour or irony.  Just a cheap, ugly container for a bunch of creepy as fuck fetishes.  Things that are better than this show include invasive surgery, a brief spell in jail or being burnt at the stake. Things that have more wit and character than this show include rocks, several of the larger varieties of spore and the sucking, empty void of deep space.

If for some reason you are not convinced and absolutely MUST watch anyway, I nominate WHY NOT IMOUTO??? as the official unofficial title of this show. As this season’s spiritual successor to NakaImo (aka WHO IS IMOUTO???), it is only fitting we give it a ridiculous shorthand name.

This anime starts off slow, making sure we get a good look at this imouto as she rushes home to meet with her Oniichan for the first time in years. After giving us a good dose of her imouto personality, and several camera pans latter she arrives home. Right off the bat I am stricken with the obvious; this anime wants you to invest in their heroine really badly, and are not even trying to hide behind some greater plot reason; here is your imouto, she in completely devoted to you, and wants in your pants, go! There is literally no shame here at all.

This show is incredibly self-aware, and honest; however, that won’t make this any less painful for those of you who do not buy into the imouto fetish. I found this anime at least moderately funny, and frankly actually feel bad about it. Like what am I doing with myself that I actually understand all these jokes? That one anal joke? Damn it! I got that even without the subber’s note. That said this anime is by no means something anyone outside the imouto fan-base will enjoy. For those initiated there may be a sense of this is so bad it’s incredible, but if you are not so inclined then I will say this clearly: Avoid with the power of a thousand suns! You will never know any better, but the you that suffered through this in another time line is thanking me for the warning.

Marlin’s Verdict: And then burn it again.

The way this dude acts you’d almost think he knows his sister has some kind of mental problem. Otherwise, he is being way too chill about all this propositioning. Considering how these other girls act, maybe by the end of the show we’ll learn that it was all actually about an insane asylum and the high school aesthetic was only the delusional construct of our sick little imouto.

3 thoughts on “First Impressions: Even If He Is My Brother, It Doesn’t Matter As Long As There Is Love!”