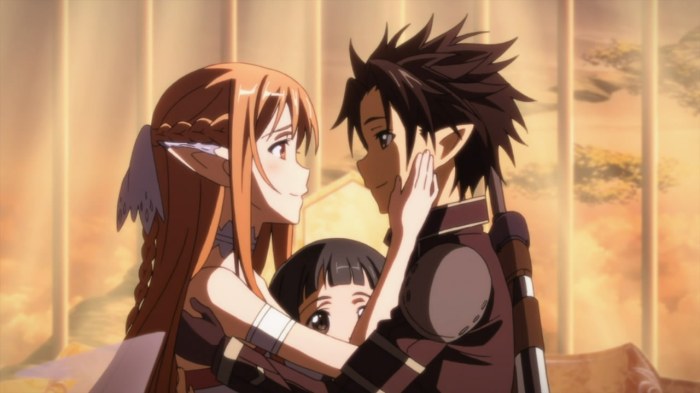 Iro’s Thoughts:
Oh, dear. Where to start? Picking up right after last week’s cliffhanger, Yui and Kirito run through the halls of the complex on top of Yggdrasil, with our AI friend opening all the doors… somehow. I thought she said that was beyond her capabilities? Or does interfacing with the card last episode (as she said she specifically couldn’t do) now give her the ability to brute force doors by pushing against them really hard? Anyway, they finally show up at the door to Asuna’s cage and have a teary-eyed reunion.

Of course, Sugou/Oberon crashes the party, forcing Yui to retreat and trapping Kirito and Asuna with gravity magic. He proceeds to have a ludicrous monologue on how great he is and how much power he has over the game, with Takehito Koyasu ratcheting his performance up to near-Dio levels. All the while, he’s straight-up molesting Asuna in front of Kirito, which is frankly disgusting both in and out of context. I pretty much watched that entire sequence in a disgusted stupor – they’re clearly trying to make Sugou even more of a creepy raper guy so that Kirito is justified in taking him out, but he’s already been shown to be an unrepentant asshole. Taking it up to the next level is just repulsive in a meta context – it’s creepy, unnecessary, and plain unfortunate.

Anyway, Kirito has resigned himself to failure when the MAGIC CYBER GHOST OF KAYABA AKIHIKO – no, I am not kidding – speaks to his brain and gives him the password to the Heathcliff account, allowing for a sudden comeback. Apparently it just doesn’t matter that Kayaba Akihiko died at the end of the SAO arc – as we have seen repeatedly, consistency is as nothing compared to the needs of Sword Art Online‘s plot. He gives Kirito a “world seed” and then poofs off into oblivion, ditching any hope for a reasonable conclusion. Man, and here I thought the deus ex machina at the end of the first half was egregious. This makes that look like a fucking masterpiece.

This episode pretty much exemplifies all of Sword Art Online‘s main flaws: The writing is piss-poor, with an utter lack of any semblance of consistency or proper storytelling, the characters are all caricatures without depth, with insulting amounts of effort put into making Sugou a Saturday-morning-cartoon-villain and Kirito into the unbeatable hero, and the show takes every excuse it can for disturbing and unnecessary fanservice scenes. For a show that is ostensibly trying to get the audience to take it seriously, these are frankly embarrassing issues. 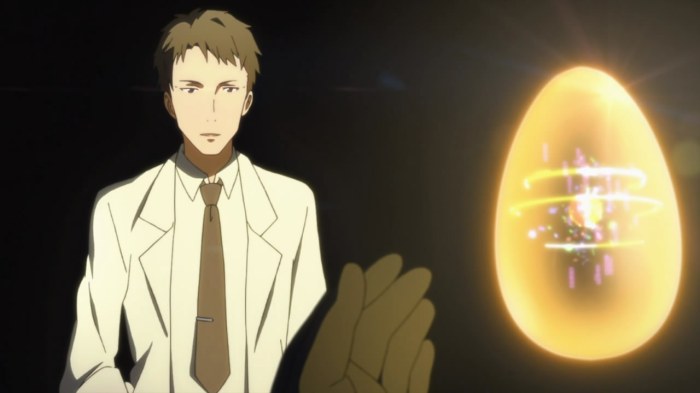 Next week should be the finale of Sword Art Online and our final impressions of the show, and I will be so fucking glad to never have to watch any more of this ever again.

Zigg’s Thoughts:
Unlike Iro, I found this episode incredibly entertaining. However, I suspect it’s not precisely for the reason the showmakers intended. Let’s put it this way – you couldn’t have made a better parody of everything Sword Art Online if you had tried. I was laughing almost constantly through the entire episode, though oddly enough there were a few telltale signs this might not have been what I was meant to be doing.

Ok, Iro’s already hit a lot of the most egregious points, but let’s take a closer look at some of this stuff anyway. Sugou was never much of a villain, especially given the extremely limited amount of screentime he’s been afforded, so his attempts at ultra-super hamminess here are clearly an attempt to up his megalomania and threat to the necessary big bad level. It just doesn’t really work – the combination of the laughable dialogue and the ridiculously deformed facial expressions the art team chose to give him makes this scene more an exercise in silliness than an actually intimidating statement of intent, and it doesn’t help that his ‘become a god’ speech is generally drawn from the deepest wells of cliche. I LOVE silly villains (see Brando, Dio) but only if they fit in the context of the story that’s being told. SAO is trying to be a serious story, so having a cartoon character as your villain is jarring.

Meanwhile, his somewhere-between-funny-and-disturbing molestation tendencies deserve a paragraph of their own, so inept are they. I’ve argued in previous posts featuring the character that making him an ultra-creepy raper is a lazy crutch used to make him seem more of a ‘bad guy’ than he really is, and I’ll repeat that statement here. Being a molester is never a desirable trait in any character, but it’s also no match for deep, nuanced character development. Villains require less of it than heroes, but they still need some and if you have to fall back on something like this to make it how obviously EVIL the bad guy is, you probably should have done your legwork elsewhere. Let’s not even mention how humiliating this all is for Asuna, a character who saw the last shreds of her dignity stripped away (hurr hurr) here. Oh and you know this scene was partially written because a portion of the audience thought of it as fanservice. Yeah…

All throughout its run, SAO has been plagued by plot inconsistencies, both of tone and of actual content. The mysterious reappearance of Kayaba Akihiko manages to be both of these, as well as a rare example of a literal ‘god out of the machine’. I can just about swallow the idea that he’s planted a computer image of himself into the system – the guy seemed to be attached enough to the technology – but the idea he would then show up at exactly the right moment to offer his killer the keys to the kingdom is, to put it lightly, a little hard to swallow. It’s also unsatisfying – rather than winning through his own strength and ingenuity, Kirito wins by being given a leg-up, and by essentially cheating even harder than his opponent does. Furthermore, the show seems to want us to treat him like some sort of mystical figure or powerful guardian. Me, I’m having trouble separating him from the willful murderer of thousands of people. Remember that? Oh well, I guess it doesn’t matter anymore right?

Let’s talk about Kirito a little. He’s not exactly covering himself in glory this episode, to be honest. I don’t think that our hero’s reaction when he’s watching his girlfriend being raped in front of him should really be ‘Is this my punishment?’ Priorities dude! It’s a small moment, but another example of how self-centered the character seems to be. How about the bit where he turns the pain limiter down to 0 and then proceeds to cut a guy in half? As if the pain weren’t enough, Sugou had already explicitly stated that below ‘3’ the user’s physical body will start to take damage. So there’s a very real chance that by killing him in the game, Kirito actually murdered him in real life also. Our hero ladies and gentlemen! Naturally, I’m sure there will be consequences for this…or perhaps not. 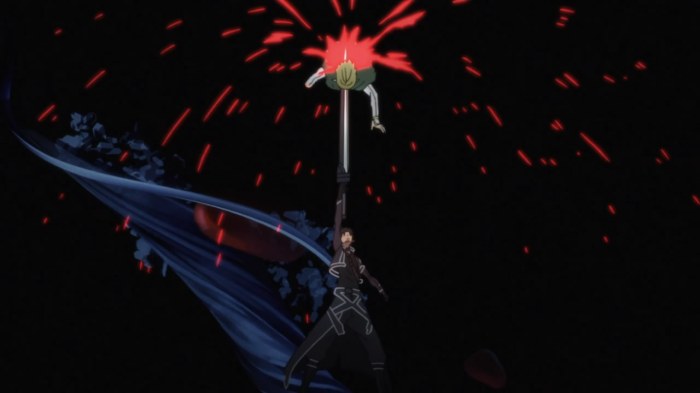 My mirth was pretty unbounded this episode, but underneath it all, it’s not funny but kind of sad. SAO has been on the rocky road for a while now, but this was confirmation if it were ever needed that it has now become a thoroughly bad show. Terrible writing, poor characters, distasteful content and lazy plotting have conspired to deliver this dud bullet of a finale. Next week we’ve got one final episode, perhaps to look back on and ruminate everything that’s happened. It’s bound to be an interesting reflection. 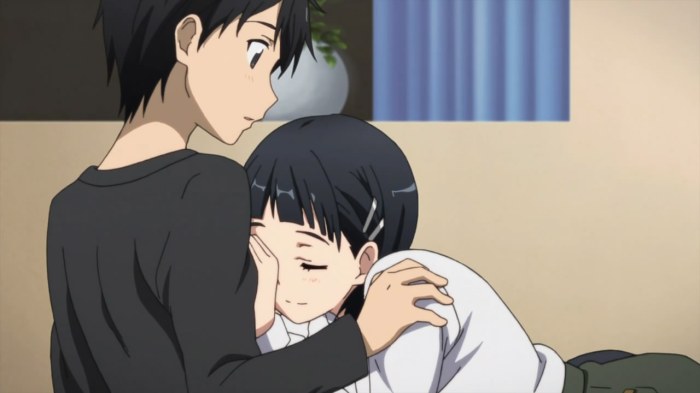