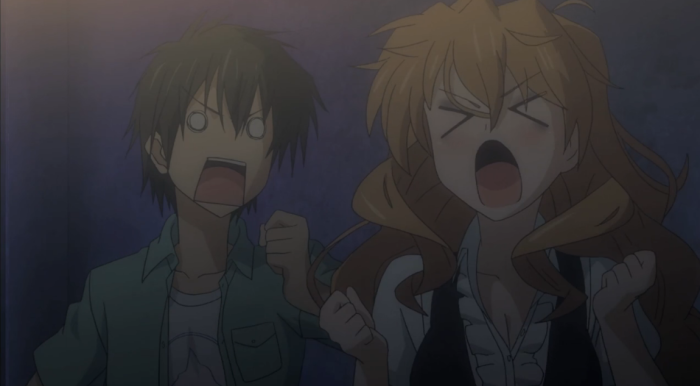 Recap: As Mitsuo starts to find feelings for another, Koko tries to appeal to him one last time.

Man, this show is starting to give me the same feeling as My Little Monster. I never thought that would happen so soon. This episode did everything right that I’ve ever wanted with this kind of romance story. As I predicted from last week, Koko’s domineering personality has driven Mitsuo away towards Chinami, basically her polar opposite. Koko’s actions against her were absolutely atrocious, and it even seemed she realized just how bad it was by the end of it. I loved the scene afterward between the three guys. Writing notes instead of paying attention to a lecture? That’s freshmen for ya alright.

While a lot of what Koko does can be labeled at least somewhat obsessive, we finally have gotten some context as to why. I don’t really know what it’s like to know someone their entire life, but I can’t imagine those are relationships that can be broken so easily. I think the crux of Koko’s argument was that, because of all the time she spent with Mitsuo and for Mitsuo and thinking of Mitsuo, she felt entitled to the same care from him. To her, their bond is stronger than his current feelings. There is a certain logic in this, it’s the reason people are less likely to break off long-standing relationships even if they don’t seem to be working anymore. It’s easy to see where Mitsuo comes from as well. With the way he does feel now, he couldn’t make Koko happy. His feelings would never be genuine and in a relationship it would be all too easy to see that. Their confrontation was hard to watch, but getting everything out into the open was for the best.

For a romance story, Banri’s confession may seem to be kind of fast, but I think this is perfect timing. Even though Koko did some horrible things this episode, Banri has also seen a lot of the good. He’s gotten to know her so closely that it’s easy to see he would come to like her. Banri knows Koko isn’t going to move away from Mitsuo immediately, but maybe this will be a step that will finally allow her to let go. I was worried we would get a lot of unspoken emotions as is old hat in many romance stories, so to see feelings come out this early is incredibly refreshing. I’ve heard a little bit of what we may learn about Banri’s accident next episode. While I’m a bit cautious at the idea presented, I have confidence in this show’s writing to keep being just as fantastic as this week.