We’re dropping shows all over the place and I’m still mad at Twin Star Exorcists, but The Roundup carries on. I have accepted Bakuon!! as our lord and savior, Luluco and Joker game are doing there thing, and Tanaka-kun and Three Leaves, Three Colors (we need a good short name for that) just make you feel good.

The Roundup is a weekly guide to all the “other” shows we’re watching this season. Check out our full coverage of:
Macross Delta | Jojo’s Bizarre Adventure: Diamond Is Unbreakable | My Hero Academia | Kiznaiver | Twin Star Exorcists

Jel: This show… So is Stig-senpai a ghost or weird middle aged woman? How many times has Rin’s dad died? Did Hane actually meet God and obtain the holy grail or did she black out in a gas station while talking to a strange man and wake up in the next town over? These are questions I was never expecting to ask and yet here we are. Weird factor aside, this was basically an episode of Top Gear to the point where I am wondering how much they are trying to emulate. I mean, they even made a big deal about leaving Hane behind when she broke down, which is the most Top Gear thing to do. I’m totally cool with that. I will gladly take these crazy road trips over hanging out at school.

Artemis: Again, why didn’t Joker Game lead with this kind of material to begin with? The first two episodes were competent but not much more than that, whereas these vignettes – which the series is obviously intending to go with for the majority of its run time – are comparatively far stronger. I can understand why Joker Game wouldn’t appeal to everyone because it’s not as though it’s particularly insightful or making any bold statements, but that’s honestly one of the things I like about it. This isn’t a political series, it’s an episodic spy/mystery one, and one of its main strengths lies in the way it depicts its varied settings. This week’s episode, set in 1930s Shanghai, was no exception: dance halls with shady back rooms, opium dealing, prostitution, gambling… there was nothing especially distasteful shown onscreen but there’s a reason Shanghai was once known as “The Paris of the East, the New York of the West”, and I enjoyed seeing that atmosphere portrayed here with the usual snappy visuals Joker Game brings to the table.

Jel: In a lot of stories with main characters wanting to have a “normal” life, it turns out they already have one. It’s kind of annoying, but in this case I actually agree with Luluco. With a family like that, a little normal would sound pretty great. Not to try and get too deep here, but I also found it interesting you could apply her feelings to any kid who’s parents split up. It’s a hard thing to cope with even if you’re dad isn’t a space patrol officer and your mom wants to be a space pirate. It would seem unlikely this wacky show is trying to tap into that emotional well, but I couldn’t help but feel that way watching it. That aside, it was fun to see Inferno Cop try and leap into action and Lalaco apparently has a life fiber cape? Trigger is clearly trying to out-Trigger themselves.

Artemis: Honestly, I don’t have a lot to add on what I said last week; this brand of comedy and the way it’s being delivered just isn’t working for me. There were one or two moments within this episode that I thought were pretty good, most noticeably the glimpse at Sakamoto’s midterm test papers (the “your knowledge of sexuality surpasses that of a normal teenager” comment definitely had me laughing), but as with the previous two episodes, the rest of it fell flat for me. I also spent most of the second half the episode being a little creeped out, and not in a funny way – I truly felt a bit uncomfortable watching Kuboto’s mother throwing herself at a teenager in an increasingly desperate, stalker-like, and eventually mentally unhinged way. I get that it was probably supposed to be one of those ‘so dumb it’s funny’ things, but that ended up being the final straw as far as I’m concerned. I’m out.

Jel: I’ve been trying to pin down why this show hasn’t clicked with me and the first half of this episode made me realize it. Sakamoto is supposed to be super cool when it seems he has no self awareness, which is one of the most uncool traits you can have. Sure he’s great at everything but he seems barely in control of his powers nor does he realize how people perceive him. I thought his working with the school gang would be some elaborate set up to teach them all a lesson, but it just turned out he’s kind of dumb? Bleh. Then we get to the second half, and I agree with Artemis. It could have been a funny joke if they stopped at a certain point, but they just took the joke way too far into creepy territory. Are we supposed to laugh at this woman because she has apparently defined her self worth around dumb romance dramas and her life is ruined when her son’s school age friend won’t return her feelings? Yeah, I’m think also out. 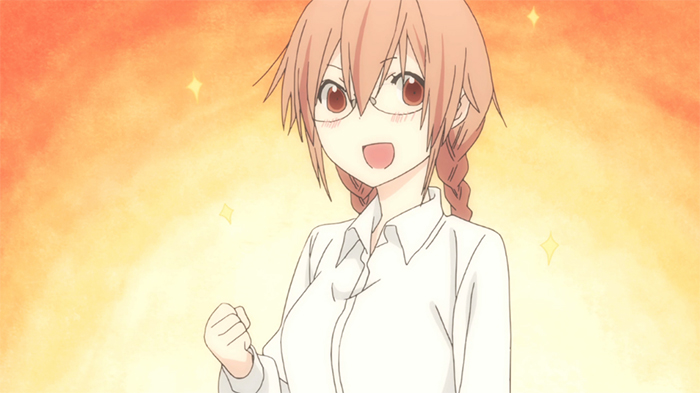 Artemis: Tanaka-kun channelled some Kare Kano this week in the form of Shiraishi, and while I dearly love that show it’s normally not the kind of writing I’d go for. Having a girl who’s suddenly beautiful and popular because she took off her glasses, changed her hairstyle and shortened her skirt has always struck me as a pretty dumb cliché – but I can’t really bash Tanaka-kun too hard for it because a) everybody is just so incredibly nice and b) it seems to be pushing the confidence angle over the actual appearance one. Shiraishi doesn’t become popular because she makes herself ‘prettier’, she becomes popular because her boost in confidence when she alters her appearance alters her entire behaviour. She’s also a genuinely good person despite her insecurities, which Tanaka and Ohta instinctively acknowledge because they’re pretty good people too. I could have really done without the boob joke at the end, which felt very out of place with the rest of the show and wasn’t funny anyway, but that aside it was as charming an episode as always.

Jel: I felt a bit uncomfortable with the message this episode was sending, but it ended well enough. I didn’t think at any point they were portraying Shiraishi hiding her true self as positive, but they didn’t particularly condemn it either. If you think about it though, that’s who she wanted to be so in a way her popular self is also who she is, so the end result was kind of a nice compromise. As Artemis noted, the fact that everyone is just so nice and the show itself is so positive really goes a long way.

Artemis: I wish I could like Flying Witch more than I do. It looks great, the characters are lovely, there’s a distinct lack of moe-fanservicey crap, and it’s just a very sweet, very warm show. So why doesn’t it warm my heart? I usually dig slice-of-life shows no matter how slowly paced, and I have a soft spot for anime set in rural Japan as well, but for whatever reason Flying Witch just isn’t doing it for me. I don’t feel any particular sense of connection to it, perhaps because I don’t feel any particular sense of connection to its characters – they should be charming and they probably are, but I still can’t bring myself to really care and I honestly don’t know why. Sorry, Flying Witch. It’s not you, it’s me. Have a nice runtime, okay?

Jel: There continues to be nothing immediately special about this show and yet I still find it so charming that I’m really enjoying it. I guess it’s all in the details as those are things that stand out most to me. I loved bringing back the fetch stick joke and the choice use of ojou-sama laugh, and little things like Hayama pinching herself with no further comment at the shock of Futaba’s cooking are nice little flourishes. It was pretty great how they worked in the bit about Yoko’s parents too, adding just the right tinge of emotion without changing the general tone of the show. So maybe the special things are more obvious than I’m giving them credit for.