Recap: Junichiro is certain Hakaze is dead, even handling her skeleton, which has somehow been picked clean in a matter of months (trust me, this does not happen.) After some fanservice laden backstory for Junichiro, another fruit appears. To make matters worse, Yoshino gets kidnapped, making Mahiro give chase.

Well, this episode was creepy and uncomfortable. We’re hit with a triple punch of skull fondling, voyeuristic fanservice, and not-incest. First news we hear about Hakaze being dead, and we get a whole scene dedicated to showing her dead body. I know there’s probably going to be magic shenanigans involved, but let me tell you this as someone with actual experience having to see decaying corpses in the field: they take a while to bleach. One time my boss wanted to retrieve the skull from a dead mink to add to the university collection, but even leaving the thing out for a month the skin had done little but bake onto the bones. Unless Hakaze died bathing in a pool of water that level of decomposition takes a long time, and the bones  obviously aren’t found in perfect position and all articular cartilage still intact. I get that this is probably supposed to be a slight Hamlet reference to the famous graveyard scene, but still it was just weird. 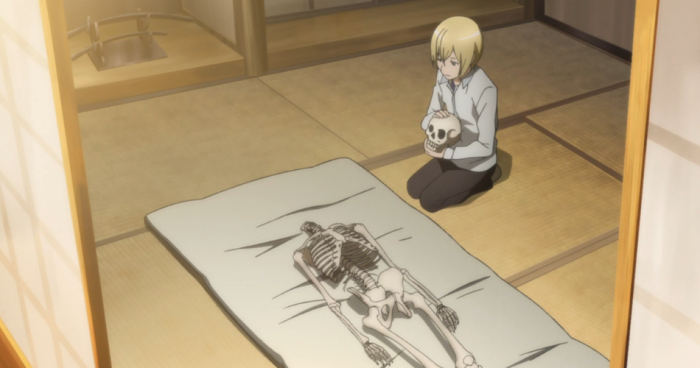 After leaving the weirdo to his whatever, the gang talk about him a little more, as Hakaze slowly sponge-bathes herself while we watch. Look, I guess I shouldn’t look a gift fanservice in the mouth as far as my favorite character is concerned, but I just found it weird. Thankfully we actually start getting to some plot again as another fruit appears. After escaping on a bus, the two decide to camp and promptly get attacked.

I’m not quite sure what’s with Yoshino’s motives at this point. I mean, I guess you could argue wanting to use the power of the military to help defeat the mages would be a good idea, if Mahiro didn’t just single handedly trash a battalion and totally make them look worthless. otherwise this scene just seems to serve in showing Mahiro’s weird still bordering on BL devotion to protecting Yoshino. Since Evangeline seems to have no greater curiosity than these teenage boy’s personal lives, we get more backstory on Aika. Turns out, big fuckin’ surprise, the two aren’t blood related! This leads to this really weird flashback sequence where she starts straddling Mahiro. The whole thing is really creepy even without the not-blood-siblings thing. Does this mean Aika was playin’ both of em? Well if anything it would appear that’s what the next episode is going to address, as we go back on another flashback sequence to finally parse out the weird interpersonal relationships between our BL duo and their dead waifu.