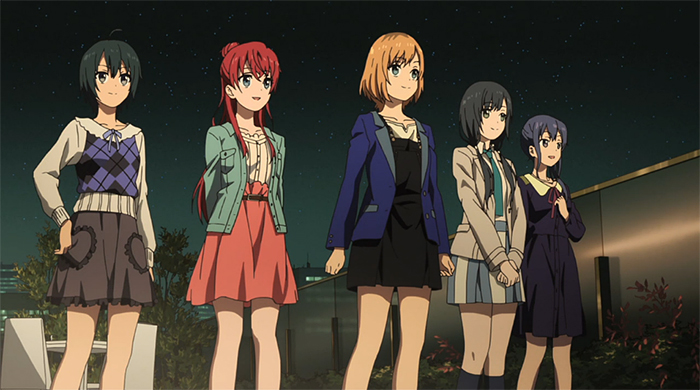 We say a bittersweet goodbye to all our Winter Roundup shows, or at least until we give our Final Thoughts on most of them later this week.

The Roundup is a weekly guide to all the “other” shows we’re watching this season. Check out our full, weekly coverage of:

Gee: Shirobako’s finale is somewhat predictable and understandably low on the usual craziness. Despite that, it’s an emotionally gratifying finish to an excellent show. Perhaps it’s too convenient that everything should end so nicely for everyone, with their lives straightened out so well. That said, the last episode is a great argument against a season 2 or any kind of sequel. Sure, some characters could use some more screentime, but I think everyone at least got their dues. Many anime suffer from either ending too early or going on for too long. Shirobako ends exactly what it needed to. If this is all it ever amounts to, I’m more than satisfied.

Death Parade – I might have shed more tears than the actual characters.

Jel: It’s been a long time since I’ve fallen apart watching an anime the way I broke down watching this episode. Chiyuki’s final decision was heartbreaking on its own, but it was Decim’s finally understanding how she felt and how cruel his tactic was that truly put it over the top. The entire scene makes Death Parade’s message about the value of life feel much more personal and important than the usual “power of friendship” or “love conquers all” themes that most anime present. At the very least, we should all want to go tell the people that care about us that we love them too. If I had to pick anything to criticize I guess we don’t really get too many answers about what happens with Nona going forward. Maybe they are leaving things open for another season? Whatever happens, this was still a great conclusion to a really unique, satisfying series.

Iro: It seems DEEEEEEEEEEN saved at least a bit of budget for the final battle, having everyone break out their special moves and hitting weird moth man until he explodes like the mediocre boss he is. Otherwise it’s the normal wrap-up sort of stuff we expect, with our final goal changed from “getting home” to “find a way to link the two worlds”. There’s also finally a chat between Shiroe and Kanami, which had more character depth than I was expecting; it’s clear that he still carries a torch for her, even after everything that’s happened. The Krusty thread is also tied up, for anyone who actually cared about that, and in general it’s yet another ending that promises further adventures, even though we’re caught up with the light novels.

I was really hyped for Season 2 when the Fall 2014 season began, and I still love Log Horizon dearly, but the main focus changed to things I wasn’t as interested in. The first season focused on the larger implications of being transported to another world, and how people would band together to survive and rebuild a functioning society. This season focused more on the personal reactions of individual characters, which necessarily leads to more time spent with navel gazing and less time spent worldbuilding. That isn’t a bad thing, per se, but it wasn’t what made me fall in love with the first season, and part of me couldn’t help but be disappointed. At least Rudy and Isuzu are still the cutest couple, right?

Marlin: With this season being more character focused, it brought to light the insufficient qualities of its characters that had at that point been put aside in favor of the overall story. Akatsuki, by far the weakest character since episode one, did not engender herself much by the end of her personal arc. She’s still a creepy stalker and the only good thing that happened is that she started to at least be more self-confident when being around Shiroe. As for the kids, some of the best characters in the series, we saw their time stolen away by other, less interesting or more annoying characters. Sheroe was an unwelcome edition from the very start. While I understand her plot importance, her mannerisms were plain unfunny. Nureha also seemed like an unnecessary addition considering she’d done nothing so far to engender any pity. The kids still got some good moments. Tohya’s point of view was interesting to see as the debate on going back to the old world was brought to them. Still, the entire trip just felt like it could have been better if the kids were able to interact amongst themselves.

Log Horizon had a good run its first season. Life under studio DEEN was never going to be pretty, but to be honest it was never a technically beautiful show from the very start. As a show about being trapped in a game, it did a lot to separate itself from the power fantasy garbage that it could have so easily fallen into. Thankfully, the ending did a good job of tying things up. Having Shiroe confront the same problems the kids just had was interesting, since his character is always the most subdued. Overall, nothing fantastic, but I don’t regret staying with Log Horizon to very end. 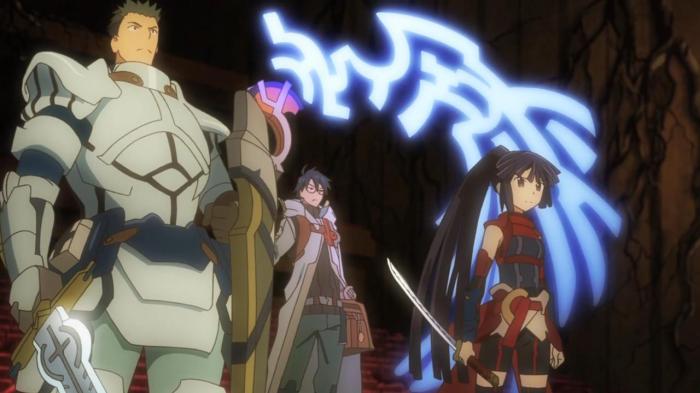 Jel: So Michael asks around about Maria and since enough people say “nah bro, she’s cool”, he lets her off the hook… sort of. Then we get the super weird thing with Ezekiel turning into Maria’s baby since the series is obsessed with comparing her to the Virgin Mary, even though there’s no thematic reason to? What a dumb ending to a disappointing series. Rather than answering it’s interesting questions about human nature it loses focuses and bounces all over the place, covering war, religion, and anything else it can think of before fizzling out into an ending that runs contrary to its overall message. Yes girls once again, being true to yourself will only leave you feeling hollow and empty, better go get barefoot and pregnant if you want true happiness. Maria could have been something great but instead I’m left feeling glad that it’s over.

Marlin: Man, this was a dumb ending. This might be dumber than G-Reco, if only for the reason that it tried to make sense in the first place, and still deteriorated into a nonsensical mess. Michael, despite being ready to murder witches all day every day all series suddenly is like, “welp, now that you have a boyfriend I guess that changes things.” Then we get the stupid thing with Ezekiel, which is really insulting to Maria’s whole character arc. Finally, by the end I just don’t get whether shes lost her powers or not. She has all her witch stuff with her, but she’s in plainclothes and seems to have no power, what’s up with that? Also, why is Cernunnos so important by this show’s end? He had maybe five scenes in the whole manga, and now we’re meant to take it as if he was an incredibly important character, and basically the one that saved Maria’s life? This show was a mess ever since the halfway pont, the only funny thing is how Bernard got turned into salt or ash or something trying to choke out an archangel. All this is best left to die in my memories.

Jel: My heart broke watching this and for all the wrong reasons. I’m sure the technical issues with this episode will be well documented by the time this post goes up, so I’ll just say Yatterman Night deserved better than this. The bittersweet resolution between the Yattermans and Doronbow was perfect for the tone of the series, and you can tell from the few bits of the final battle that are actually animated that they were heading in the right direction. I’m looking forward to seeing the finished product in the future as we’ve been told the bluray version will be fixed, but I’m sad that this may be a permanent black eye that will keep people away from an otherwise great series.

Gee: Boy what a great finale…except for all the parts that weren’t. Thematically and tonally, this was exactly what Yatterman Night’s last episode should have been. It was heartfelt, energetic, heroic, and bittersweet. There were some great set pieces and fantastic animated sequences. The problem was that by the last third, they were resorting to reusing those very same sequences multiple times in the same episode, literally within minutes, if not seconds of each other. It’s clear that something bad happened during the production, whether it be lack of time, manpower, or resources. It’s a shame because from a directing standpoint, everything was going in the right direction. Here’s hoping the bluray version can fix the glaring problems with what is otherwise an exciting and fitting finale. 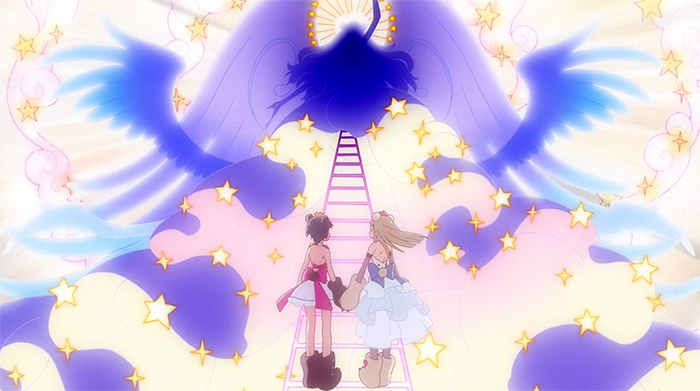 Yurikuma Arashi – As normal as Ikuhara gets.

Jel: I guess I shouldn’t be surprised by this straightforward ending as Yurikuma has pretty much stayed right on message since day 1. Of course I say “straightforward” by Ikuhara’s standards – there was still plenty of visually fascinating flourishes and meta physical conversations to keep things interesting. Plot wise though, everything made perfect sense. Kureha’s transformation was the ultimate reminder that no matter what the girls do, their love is going to make them outcasts. The beauty of the message is that no matter what the other girls do they can’t touch them now, and as we see with the poor discarded Robo-Bear towards the end, the cycle will continue on. I feel like with this episode and really for the series as a whole, we could have used a little more time to let things simmer and develop. Even so, it was a fitting finale that made the best use of the time it had and I’m glad Yurikuma turned out to be pretty solid in the end.

Marlin: As with all Ikuhara finales, there’s something I didn’t quite grasp, but it was still very pretty. The solution in the end was very obvious, but also touching, as it showed Kureha was willing to make the sacrifice the picturebook talked about that would finally unite them. Sumika as Kumaria was kinda out of left, but thinking back on it, it does make some kind of sense. Only part that lost me was whether or not they were actually gunned down and went to bear heaven or if they just escaped back to the bear side.